Crook of Lune to Aughton and back - 7 miles

I've never noticed this long-distance-path before. I happened upon it whilst browsing the OS map.  It is only 17 miles in total from Lancaster to Kirkby Lonsdale. I have previously walked from Lancaster to Caton (Crook of Lune) in bits and pieces many times so today I  took off from Crook of Lune.

From my parking I walked down the road to Crook of Lune failing to notice a walled path which would have been safer.

I was off at 9:00 am, The river bank provided perfect sheep cropped turf and nobody about, not even at the popular car park. The river bank path was blighted every so often by black rectangular burnt patches where folks who usually go to Costa del Spain to mindlessly misbehave had set up their barbecues. Litter was surprisingly absent - the litter pickers must have been before me?

The path entered steep sided woods and here I met two tough Lancashire guys coming the other way. One noticed, much to my surprise, my favourite item of outdoor kit. I bought this Pertex windproof jacket over twenty years ago from Mardale Clothing who manufacture and sell from a unit in an old Industrial Revolution red brick building off Strand road in Preston. The material is incredibly light and sports a hood and two pockets. When you set off in the morning and there is a nippy wind but not enough to justify anything heavy this garment is ideal - you can scrunch it up into a ball not much bigger than a fistful. Years later I went back to Mardale to try and get a  replacement but they no longer make it and looking at their current website they seem to have changed their whole profile. The chap who recognised this treasure obviously regarded it as highly as I do having had one himself but no longer, and suggested I should pass it on to him if and when I had finished with it. That was quite a jolt for me to have somebody recognise this gem from so many years ago. Outdoor gear manufacturers have a habit of making something classic, then messing about and spoiling it or discontinuing.

Beyond the woods the 1906 Waterworks Bridge appeared which serves Manchester from Haweswater reservoir in the Lake District.  It is worth noting that this provides a rare footpath crossing of the River Lune.

Beyond the river takes a massive loop to the south which the Lune Valley Ramble follows. A tributary stream has to be crossed here and that would normally necessitate walking further up to find a crossing, but a rough descent from the path to its bank and a squelchy traverse leads to some stepping stones and a handy shortcut.

As I approached Aughton I had a spell of drizzly rain for about half an hour. Aughton was eerily silent apart from a lone white delivery van  - I see them everywhere nowadays and I suppose remote areas have had vehicle volumes increase with the advent of more on-line shopping.

The road out of Aughton is incredibly steep and inadvertently walking thirty yards beyond the footpath turn off seemed more irritating than it should have. The return journey at a higher altitude over undulating fields gave splendid views of the Lune valley below. 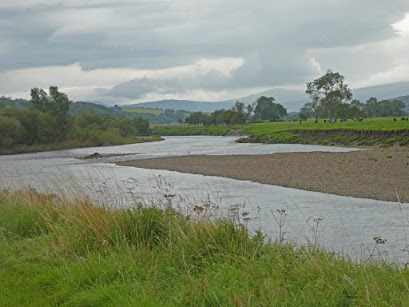 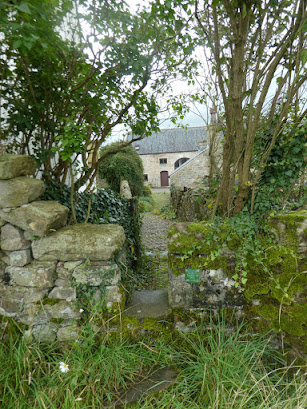 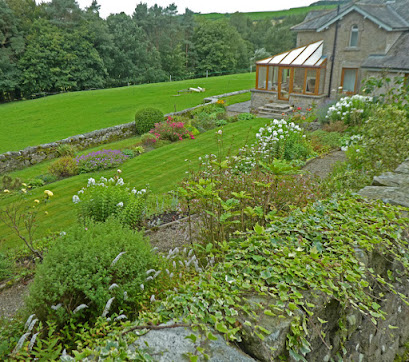