If I walk a recognised long distance path my preference is to walk it in the same direction starting at one end and finishing at the other end. This tiddler is only 17 miles altogether and I had already walked the first part and then the second only a few days ago - see previous post. Today using a circular route I was able to continue but filling in the final section out of order. The middle section will at least be completed in the ssme direction. I previously found a location to leave my E-bike for that middle section next time and the same for a car park at the northern end.
I was lucky to get a vacant parking slot at Devil's Bridge in Kirkby Lonsdale and was soon off onto footpaths from the Whittington road. A steep grassy climb gave me good views back down to Kirkby Lonsdale. At Low Biggins an ancient narrow mule track was initially overgrown and rocky underfoot making for potential ankle twisting progress. The path then developed entirely into a fast flowing stream across its full width for over a hundred a yards needing  care and skill to keep the feet dry. which alas I didn't. A couple in front of me were making heavy weather of this and at first I thought they were going to turn back.
This walk had a little bonus: a short diversion to  Sellet Bank trig (117m.) I was able to see right back up the Lune valley beyond Kirkby Lonsdale, the scene of a number of recent walks exploring this area. It is always pleasing to let your gaze wander over large amounts of terrain that you know you have had the pleasure of previously exploring.
A narrow, grass-in-the-middle tarmac road took me down to Whittington. The church stands superbly on a mound overlooking this pretty village, and the site dates back to the 1200s. The oldest part now is the tower dating to the 16th Century, but the rest is as recent as 1875; its stance in the landscape made me think it deserved more interesting history than that.
There were two lane options just after Whittington to get me to the Lune and the return to Kirkby Lonsdale which was the main aim for this walk. I chose the most southerly. It started as rough tarmac then became unsurfaced. There were perhaps a dozen unavoidable mini lakes across its full width over a half mile distance. I had no alternative but to teeter through on tip-toe but inevitably I had wet feet again. My thinking was to shorten the distance of the final section when I complete it, but I will for sure walk that bit further and return by the more northerly lane which in any case comes out at a convenient spot to park the car.
The walk back up the Lune was pleasant enough. It is now a wide river with varied sections of fast flowing water and slower parts - an angler's dream. I saw a chap wading in the middle casting and had a touch of envy thinking how he would be enjoying his pursuit. I took a long zoom shot. When I was back home looking at the photos he had the most miserable expression on his face.
As Devil's Bridge came back into view I was reminded of publicity last year of youths dying and being injured "tombstoneing" from the bridge. I crossed the road and walked back through the little park to my car. Memorial benches are dotted here and some seem to commemorate deceased motorcyclists - the bacon butty wagon here is a Mecca for these guys and on a Sunday all the surrounding roads with their sweeping bends are resonant with the sound of high revving machines - police proliferate, but there are still many accidents.
I hope the next, and final part of this adventure will include deployment of my recently acquired e-bike.
PLEASE CLICK PHOTOS TO ENLARGE 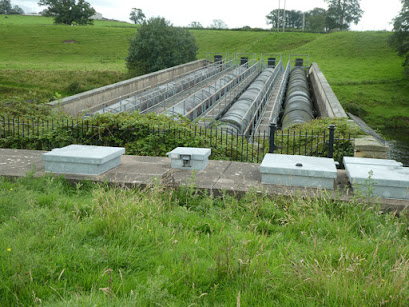