There has been discussion recently amongst fellow bloggers about having an objective for a walk. I am all in favour of that but at the same time, for me, it must not override.  At the moment I am dodging back and forth making a very detailed plastic model of a Land Rover. Years ago I was a Land Rover enthusiast and every small detail on the model brings back pleasurable jolts of familiarity, or in the case of the rear cross- chassis member, the drama of it folding in half as I was pulled backwards out of a deep quagmire by another member of the club. Fortunately the club chairman had a garage/workshop devoted to Land Rover dismemberment and reconstruction - he was a wizard with the welding gear.  So the value for me is in the making; the final result is of much less consequence. I looked at Internet quotations on the subject and almost exclusively they major on having a goal and sticking to it come what may. I wonder where that leaves me?

My objective today was to visit the less frequented subsidiary 187m spot height on Whitbarrow. The recognised summit at Lord's Seat is one and a half miles away but the view from 187 is far superior.

Whitbarrow is the massive limestone escarpment one sees from the A590 on the way to Grange. The steep dramatic white limestone cliffs front a huge undulating plateau that stretches back north for a couple of miles with many footpaths, climbing crags and archetypal limestone scenery - this has been an all time favourite location for me for well over twenty years.

The steep zig-zag path through the trees from Milll Side is of course familiar to me but today I turned off by mistake on an earlier zig or zag before the one that leads more directly to the elevated start of the plateau. I had not been on this path before, and as it became narrower and less frequented I was intrigued. Large limestone cliffs on the right were impressive, then round the corner a climber was belaying his girl partner who was just topping out on a bolted route fifty feet up. I tried for some conversation but he was somewhat taciturn and all I gained was that this was a French grade 6b.

I pressed on realising I was now traversing the foot of the most impressive part of the crag seen from the road and heading in the opposite direction from my 187 objective. The path became more exposed with steep limestone scree dropping away to my left and stunning views down into the Witherslack valley and the Lake District Hills beyond. There is something magic about the colour combination of clear blue sky and white limestone. The path climbed heading towards, but still below the edge of the plateau and I branched off and scrambled steeply upwards. An enchanting march followed, rising  across a vast area of pathless limestone wilderness dotted with spiky hawthorn, miniature yew trees, brambles, heather, bracken and gorse and struggling birch, pointers to the direction of the prevailing winds, and much more, interspersed with lush green turf and gleaming white stone. I was up onto the plateau proper where many walkers plodded the trodden trail running south north. I crossed their route and circled round, heading across pathless country stopping on a group of convenient limestone boulders to munch my pasty from  our local bakery along with coffee from my flask. And so after soaking up the pleasures of an unplanned diversion from my objective I arrived at 187 and recharged with one of my all time favourite views. This little round of less than four miles was a gem of unexpected exploration and I now have a new objective: to continue with that airy path from where I ascended to the plateau and find put where it leads. On the descent I met another walker and chatted and she mentioned something about a cave in the region of the crags on that newly discovered path, so yet another objective - I wonder where all this may lead? 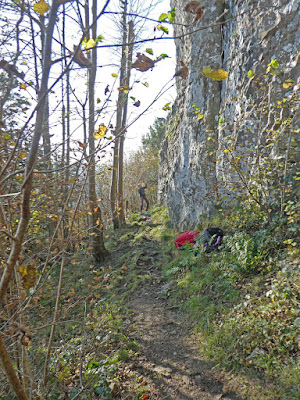 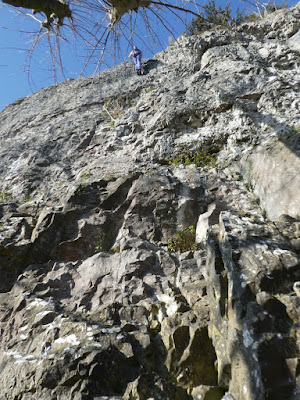 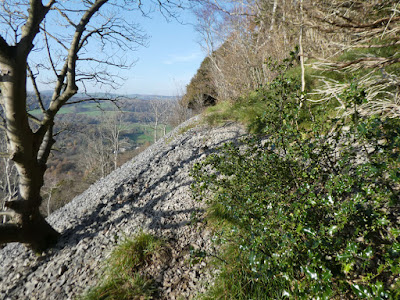 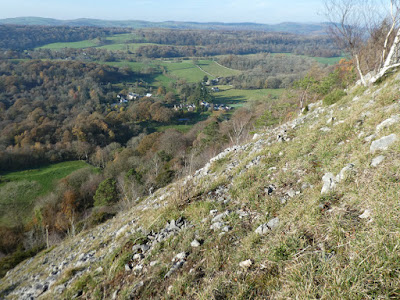 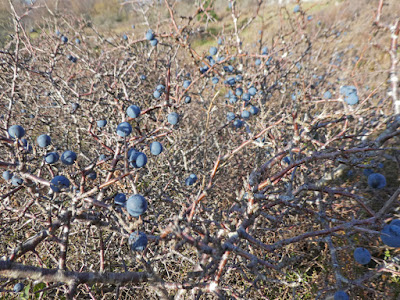 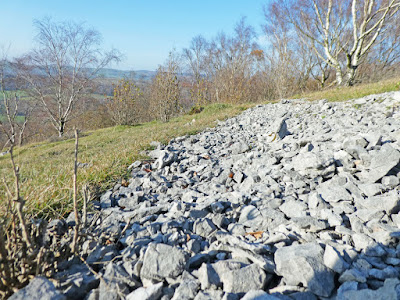