1.4 miles under the microscope

Back in Lockdown again. A daily walk from home may alleviate? Even if  it is only my shorty 1.4 mile circular. Today snow still lies.  Some newly bought grippy things for my feet have me eager like a kid with a new toy to give them a try.  A few yards up my drive and  a glance back reminds me of the gates I made for my neighbour back in the summer. 'Twas an absorbing and pleasurable project and a little smile comes on my face.

Another twenty yards and I am looking down my road at the grand old tree that overhangs; a couple of years ago a large vehicle was unable to pass and had a bad time reversing out of its predicament. Branches have been lopped since.

Only another thirty yards and a large boulder on the lefthand verge forms the end of a raised flower bed. Again, several years ago, my door bell rang and Denise from down the road had inexplicably managed to hit the boulder and ended up with her whole car perched on the flower bed two feet above the height of the road - could I help was the question. How the car was recovered remained a mystery to me but it would have needed some heavy lifting gear combined with much ingenuity.

My road drops gently for another hundred yards then a steeper short drop to a T-junction gives me a minor panic when there is ice and I worry about going straight on into the wall on the other side. That wall bounds the house of a retired electrician who grudgingly came to do some work for me twenty years ago when I moved in. He was disparaging about the wiring in my house and when I asked him about doing a re-wire he said he wasn't interested. I wouldn't want to be involved with him and an insurance claim for his demolished wall.

A left turn and crossing the road has me looking down the top of the wall which granddaughter Katie has so often walked along even from a very young age - happy days. Katie is nine now!

A few hundred yards further on at the next T-junction our telephone exchange sits with a sort of abandoned atmosphere and a promising contender for worst architecture in Arnside. Across the road red and white safety barriers shroud the box from whence comes my Broadband - that is not unusual, but this time it has been extended to include temporary traffic lights. We have had our problems with Broadband but all has been tranquil for a month or two - perhaps we are in for another period of disruption as they try to identify gremlins in the system?

A right turn and I am passing the playing field where I so often approached from the other side two years ago, or is it more, after picking up Katie from school and I would sit around while she played with her chums. When Katie emerged from the school with her friends there was that great sense of release as they all charged off across to that field for uninhibited play.

Next we have our modest war memorial and a British Legion flagpole which flies a Union Jack at half mast at approximately monthly intervals. Today, although painted white itself, it contrasts against the background of snow.

Across the road is the private dentist who removed a root for me then telephoned an hour later to tell me they had removed the wrong one. I was invited to go back and have the proper one removed - they generously agreed not to charge me the second time.

A left turn then another left has me climbing steeply up High Knott Road. At the top I look across to the nursing home where my next door neighbour visited her husband daily for a year or so before he died  - I'm not sure how many years ago that was but I bet if I research it will be more than I think.

High Knott Road is open on the left with extensive views across the Kent estuary intermittently obscured by shrubs and trees. The massive enviable houses on the right are elevated higher and must have the advantage of those views uninterrupted - they are the kind of houses you could go for a walk in.

High Knott Road ends and becomes a track through Redhill Woods managed by National Trust. I notice they have been at it again with their strange obsession for felling trees.

Dog walkers abound. They tend to stop and talk to each other blocking the path - their space extended by dogs held out on leads and I have to creep round the outside "off-road" to get past.

The track exits onto Silverdale Road and straight across is the cemetery with its little chapel now used by Arnside Parish Council as a meeting place. The substantial ornate cast iron gates and railings remind me of a community minded local couple spending much time last summer refurbishing and painting them to pleasing effect, and still pleasing today but now decorated with snow.

There is one more personal resonance as I look down Silverdale Road towards home but that remains a secret. 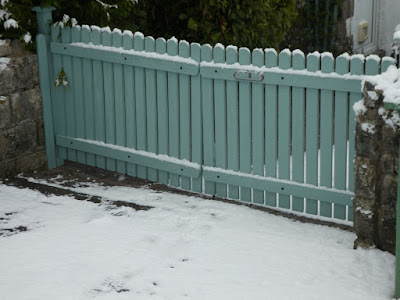 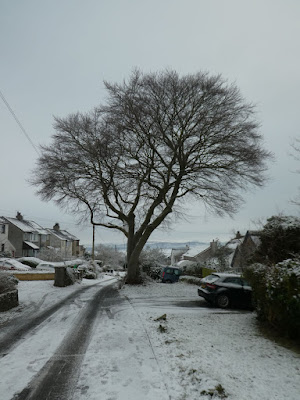 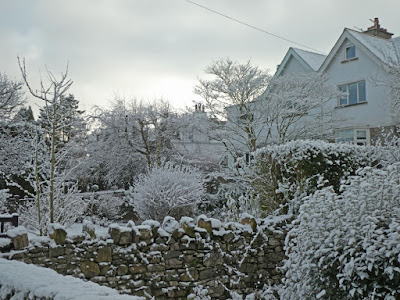 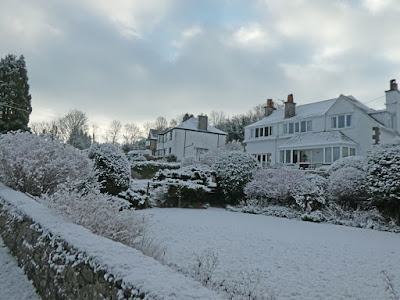 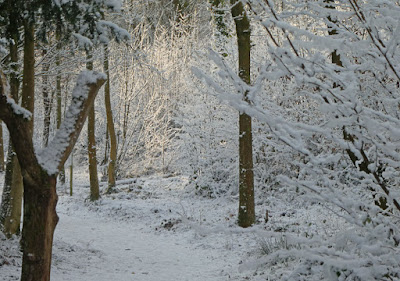 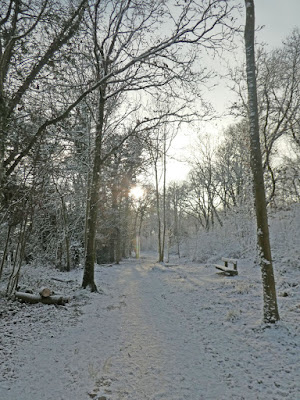 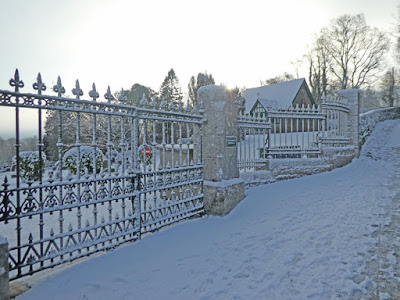 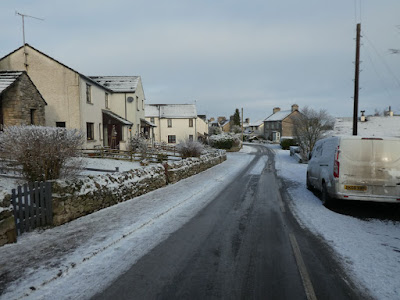