During First Lockdown I found a path partly following the northern rim of this disused quarry, but it then veered off to lead me back to Arnside Tower. I did try to get back to the northern quarry edge but this steep limestone scrub area was impenetrable.

From the railway level crossing near Waterslack the extent of this massive u-shaped bite out of the landscape is apparent. Imbued with my rock-climbing background I am always looking for "a good line." The southern edge sweeps upwards and then round to the back of the U-shape to join  the northern ridge. There is a path which follows that southern ridge but not closely and I have wondered if I could find a way nearer to the edge to follow a more aesthetically pleasing line.

The extract below comes from:

the website which invites people to record individual Ordnance Survey grid squares and in view of the copywrite note I've included that acknowledgement. The entry is from eleven years ago.

Middlebarrow Quarry
This stopped working in 2000 when permission to continue tearing the heart (and most other internal organs) out of Middlebarrow ended. There had been a plan to deepen the floor which may then have extended below sea level and possibly affected local watertables. More recently there have been plans put forward to "develop and promote a wide range of high quality leisure and tourism facilities" (God help us). As it stands the floor of the quarry has been planted with lots of spindly trees and even some buddleias - the local AONB team would have preferred it to re-generate spontaneously from natural seeding. It will take centuries for this hole to blend in!

© Copyright Karl and Ali and licensed for reuse under this Creative Commons Licence.
Only a few hundred yards from home a dramatic view across the valley opens up with the entry of the river Kent into Morecambe Bay away in the distance. That view is always like a new little surprise to me and much appreciated, it is accentuated by the steep drop immediately in front of the camera looking down Swinnate Road.
Further on I have recently noticed enviously a little red campervan made even more attractive by its pleasing shade of red and curvy outlines.
I am soon following a public footpath alongside and below the railway. I knew it would be sploshy but it was more so than I have seen before and some ingenuity and care was needed to traverse a couple of mini lakes restricted on the left by barbed wire fence and on the right by an electric fence (I didn't test to see if it was live.) I think next time I am out and about locally I will try my welllies. Local walking here does not lend itself too easily to minor quiet lanes and one is compelled to use footpaths more.
After crossing the front opening of the quarry I ascended steeply roughly in line with the southern quarry ridge, but the path then veers off further south through Eaves Wood. I pressed on taking any minor paths to the right sometimes having to retreat  until there was no path but following limestone pavement interspersed with yew, bramble, thorns and all the other indigenous limestone tress and the like. After twenty minutes I suddenly found myself back at a previous point, having walked in an elongated circle. A wire fence barricades the edge of the quarry. I could see a narrow path on the the other side  avoiding all the trees, shrubs and limestone pavement and it was several feet wide and well safe enough, but there was the excitement of  perhaps a two hundred foot drop not far away. I was able to follow that all the way round the bottom rim of the u-shape and then eventually join the northern ridge on the other side. My mission had been accomplished.
Rough going across and down more typical limestone pavement and arboreal terrain had me back on a well established but rocky path skirting round the northern extremities of Holgates caravan park and down to Arnside Tower and then back home on the road.
That was a satisfactory outcome of a local exploration that has been on my list for a while. It would have been an unlikely denouement but for Lockdown Two. 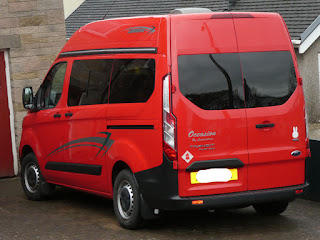 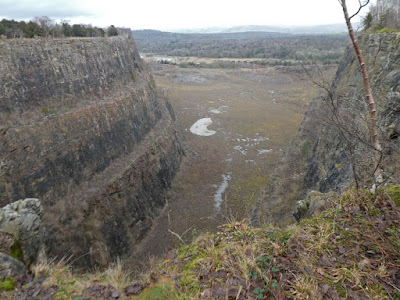