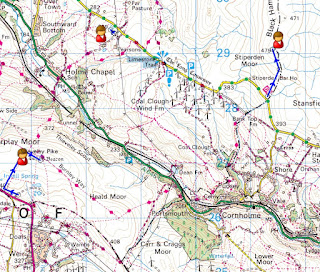 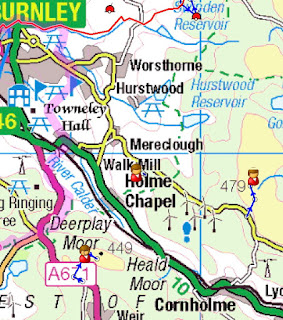 I'm sure you'll all be thrilled to read that I've ticked off another three of the 66 trig points on OS 1:50 - Sheet 103. That leaves another 49 still for your enjoyment.
Feeling masochistic and annoyed with myself for missing Tuesday, the only good weather day this week I set off for an hour's drive just to do these three trigs each only around one kilometre from a road. All three were visited in low cloud, eighty yard or less visibility and with on and off drizzly rain.
Thieveley started from one of those typical Pennine farm buildings on a lonely road side with piles of stone, other building materials and broken down vehicles from projects long abandoned. A path involving four stiles and two gates within one kilometre rose gently through rough moorland with reeds predominant. There were several places where disused fencing wire had been left half concealed in the vegetation, something of which I am particularly wary having broken my arm as a result of something similar. Within  five minutes I found my current waterproof boots were no longer waterproof and I spent the rest of the trip with wet feet.  My son speculates that this is my ideal kind of day - the more suffering the better - he may be right. I have to say I thoroughly enjoyed myself. I did have a sneaky feeling of guilt for using the car to drive between, and only walking less than three miles overall. I had a small reward at Thieveley trig, it was inscribed with a woefully cribbed version of "Once more unto the breach..."which I suspect was put up before England lost in the final.
Having walked close to the Singing Tree ( a sculpture that blows music in the wind) on my  Berwick to Castle Cary walk and dithered before deciding it was too far off route, and having driven close by several times within the last few months I decided to have look in between the first two trigs. See photo below and also a shaky video I took, mainly so I could capture the sound. If you want to know more and see some splendid photos  CLICK HERE 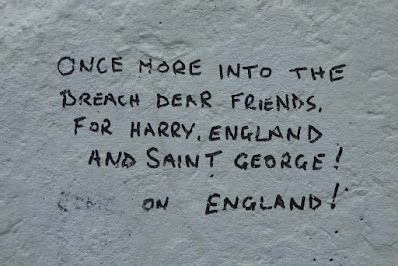 You will see that I have made no attempt to edit this. At least you do hear the sound now and again against the roar of the wind. The first few seconds are priceless
Posted by Sir Hugh at Wednesday, August 18, 2021