Many trig points have little to offer other than the likelihood of  visiting some obscure location that you wouldn't have done otherwise. Today all four gave me a bit extra.

For Marsden Height I was able to park exactly opposite the short footpath leading to the trig. It was a narrow, dark passageway needing care with large stones strewn underfoot difficult to see  and threatening an ankle twist. Emerging into a rough field the trig was as nondescript as they come. Looking more closely I saw someone had tried to remove the bronze mounting for the surveyor's theodolite but without success - it was so well embedded. That summed up much of what I have read about the history of the making of our best in the world OS maps and the thoroughness and attention to detail that was employed at a time when the Empire was at its height and we saw ourselves as invincible, but the trig point only appeared from 1936 onwards when a re-triangulation of GB was started, but the traditions had lived on.

A drive on narrow roads took me to a lane end I had researched on Google Earth for parking to visit Walton's Monument. I had not taken into account the steep drop off the road taken by this lane end and its rough bouldery surface and I wasn't risking damaging the car. I eventually parked partly up onto the grass verge  with some vulnerability opposite a gate leading to the trig. I was there and back in twenty minutes.

The bonus monument was erected by an eccentric land owner in 1830 for a purpose that is not all that clear if you click on the link below. In so doing he managed to trash a much more ancient menhir to stand his monument upon - goodness knows what was in this guy's mind. Anyway it provided me with quite a good photo with Pendle Hill topped with cloud looking down at all this from the horizon. Pendle is similar to Ingleborough being visible from so many points - I reckon Bowland Climber and to some extent myself have a plethora of photos including this  worthy hill.

The next two trigs involved another drive but then a pleasurable four mile walk linking them together. For Extwistle Hill I had to trespass a little and if you look carefully at the OS map (very carefully - see map below) the trig is not located in the only field I could access within reason - it was just over the wall in the next field.  That demonstrates how precise these OS maps are. I  was able to poke the trig with my walking pole and honour was satisfied. I held the camera high and pointed it down to get as much of the trig in the photo as possible. From where I parked the car this had been a westward there and back walk,  then continuing eastwards to take in Delf Hill.

Part of that walk coincided with the Brontë Way which Bowland Climber and I completed in sections  in 2018. Again this trig was plonked in the middle of some moorland with old quarry workings surrounding and little else to say, but I wasn't there long because the trig was home to a wasps nest and they were buzzing all around my head as I took a hurried photo and plodded off to descend a little to get out of the cool breeze and erect my chair for my elevenses, I spent longer than normal enjoying the luxury of this newly discovered piece of furniture - I am sure now that this is going to be a winner on future day walks.

I descended further through the quarry workings watching some youths on trail bikes performing suicidal ascents and descents that their mothers would not have approved of. I returned by a private water board  grassy track providing impeccable walking, entered and exited by padlocked gates which I had to climb. 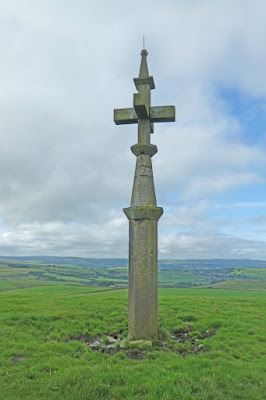 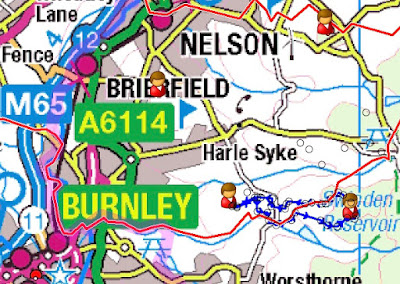