Mellor like most of our towns was not designed to accommodate private cars. Many of the streets are lined on both sides reducing them to one way traffic with constant jams with vehicles coming in both directions. It is such a shame because this is a valuable example of that Lancashire village yellowy sandstone building. I spent ages trying to find somewhere to park ending up in a modest residential estate. Even here most people have more than one car and often park on the road outside their houses. I tried not to be blatantly outside somebody's view from their front window but even that ended up with a compromise. Before that I had found a spot on an updated council estate. A resident emerged in friendly manner and told me that it was wheelie-bin day and several vehicles had been hit by the refuse trucks coming round that corner. I then saw a shell suit clad youth across the road climbing up his fencing to get on top of the open and full wheelie-bin where he proceeded to jump up snd down to compress the contents - that didn't look like a good omen, I had visions of the rest of the gang break-dancing over my car. I moved off.

A short walk out of town took me up to Mellor Moor trig with panoramic views all round. The huge expanse of the BAE* complex dominating  to the west. There is a redundant Observer Corps post and also a topograph. An informative plaque enlightened me. My father was in the Observer Corps during the last war but this post, one of 1500 dotted around the country is from the later period of the Cold War. Here personnel would be underground in a claustrophobic bunker to report on radiation levels etc. in the event of a nuclear attack - mmm!

A  mixture of lanes paths and quiet roads lead me to the second trig. During the whole of this walk I experienced a more than usual ambience of silence and peace.

After leaving the road at Balderstone a complex of paths radiated from a private house. As I was trying to sort this the owner emerged and tried to direct me. I had a feeling he had sent me on the wrong path but I couldn't face going back and loosing face so I decided to improvise. I descended to a stream in woods. I climbed the steep bank after crossing using tree roots but the way was blocked by barbed wire. I dropped back to the stream and found a footpath  which eventually brought me to another barbed wire fence. I used my length of  15mm. rubber  pipe insulation slit down its side to cover the wire and managed to climb over to get me back onto my route - good job I had been in the Scouts and learnt to "be prepared."

At the A59 my 2015 1:25 OS map showed no road through the BAE complex from north to south but my  2020 1:50 map showed a yellow public B road going right through to emerge just to the east of Salmesbury Hall. Only two or three vehicles used this mile of road as I walked its accompanying cycle track.

Trig number three was on private farm land and twenty yards the other side of yet another barbed wire fence. This had obviously been breached before, the wire being a bit floppy. I covered the barbed wire again with my rubber sleeve then extended my walking poles and wedged them under the wire at a width of four feet pushing the wire upwards enabling me to climb through between the barbed wire and the fencing wire below.

After all that I descended to my legal path erected my chair and took lunch. The rest of the walk back to Mellor on quiet roads and paths was uneventful. This had been a particularly pleasing day where I had used some ingenuity to overcome obstacles and experienced an overwhelming sense of peace. 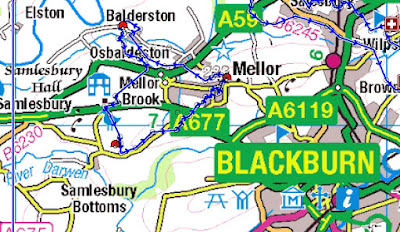 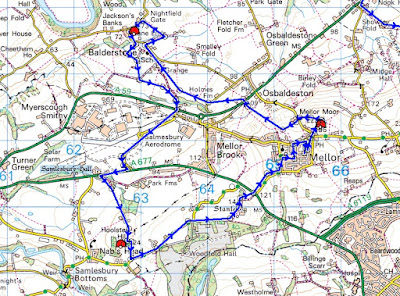 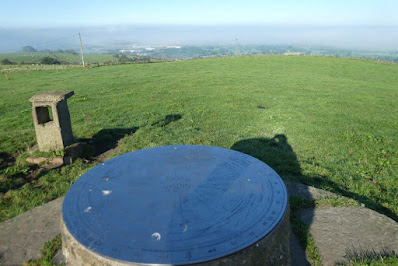 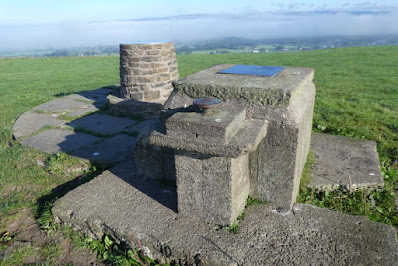 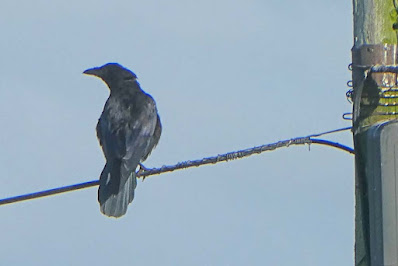 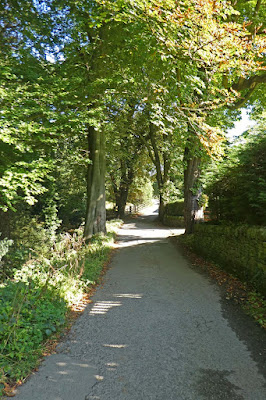 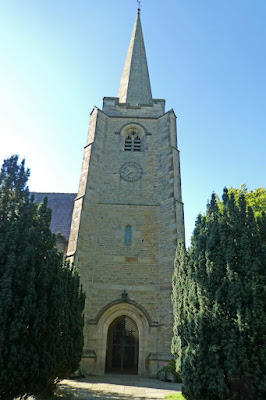 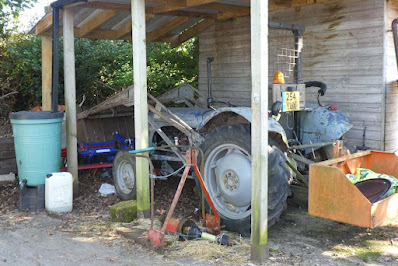 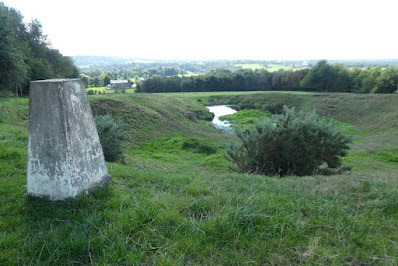