Yesterday I had to catch the earlier 06:02 train from Arnside so I could catch the 14:36 back from Bootle Station. As I go further north the time for the return train becomes earlier. All this is to allow for my penchant for arriving home in time for a hot bath, a meal and a relaxing evening. The hot bath is now enhanced by the new boiler - I just turn the tap to full and get the bath rapidly filled at a temperature that now necessitates addition of cold water! How did I put up with that old incompetent boiler for all those years?

I was walking by 7:30, the first half  mile through Millom's streets to get back on the CCW.  I persisted with what I thought was the Impressive Art setting on the camera, but I think I must have had it set on something else - all todays photos except the odd one where I overruled have a ghastly green tint.

All the walking was on pristine, perfect walking surface beach until SD 096 847 where a jink in the route indicates transfer to the cliff tops. Huge vistas of sand with not even a footprint, and huge skies provided wonderful walking, and I reckon the best so far on this LDP (long distance path). I saw one or two people, but all away in the distance.

The river Annas is quite strange. You don't expect to see a fully fledged river running along a cliff top. It is well supplied in its short seven kilometres from four or five sources near the summit of Black Coombe. At one point there is a somewhat over engineered bridge which the CCW crosses, and a bit further on a decidedly less professional companion consisting of just two beams - plenty of scope for a mini disaster.

All in all a grand walk arriving at Bootle Station for 2:00pm with thirty-six minutes to spare. 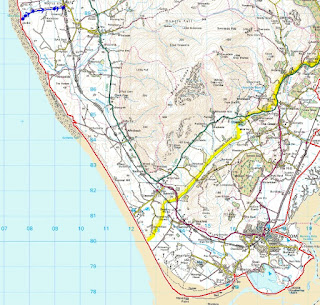 A few photos from a visit to Grizedale Visitor Centre with High Horse and Katie. We followed the Gruffalo Trail. We went a bit late in the day, so there is plenty left to do there on a another visit. 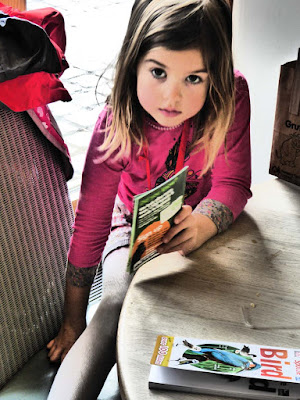 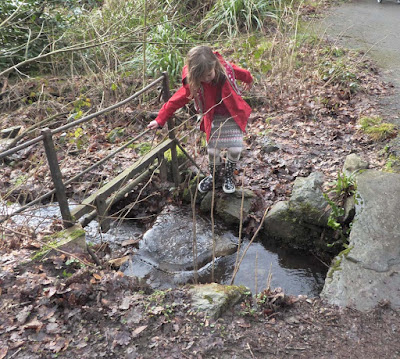 0602 train? Goodness me! The early start that must have necessitated shows some dedication to the cause.

Great to see you back on the Cumbrian Trail Conrad now that the weather may be improving. Yes 6 o'clock trains are pretty rare in Longridge. But I can appreciate your raison d'être. I think you need to sort out your camera settings, is there a back to factory mode?

Conrad, that bridge over the Annas has a distinctly 'unfinished' look about it. Fair play for braving the crossing; the water would have been chilly...

Gayle - I can get a bit obsessed sometimes. I recognise the symptoms, especially agonising about making a new purchase, but have little control. I have just bought a Mountain Equipment Arete down jacket (v. lightweight.) I went through the process researching prices and weights and specs of all in that category, and argued with myself about the need, but I knew I was lost from the beginning. The going price is around £140. I eventually got one from Germany for £108 - it arrived yesterday. There are others advertised for less, but only in very small or very large sizes.
-------------------------------------
bowlandclimber - I have just converted all the photos to black and white with what I think are pretty stunning results. I will be posting a slideshow on Dropbox when Dropbox has digested the file.
------------------------------------
Dave - In my younger days I would have trotted over one of the single beams without thinking about it, but not now - older, less agile, and wiser.

Holiday village at Haverigg ? - is that the one for the guests of Her Majesty ?
Those beaches, although a bit bleak, are superb: one of the last walks I went on with my parents was along those unbroken sands - almost like the Outer Hebrides except for their deeper colours.
I calculate that on the next section, you will have to settle a later train and a Roman bath - may I also recommend the fish restaurant/pub in Ravenglass - the best in the northwest. Bar none.
(Silloth as starting point ? - you are anticipating meeting yourself coming back, perhaps)

Gimmer - thanks for pointing out the title error; it has been rectified. I was rather pleased with some of those black and white efforts, an ill wind...

There is a series on BBC 4 at the moment on the history of photography in Britain and there is no doubt about the power and atmosphere of
b snd w. Also the importance of recording monstrous events for posterity. One wonders at the conflict between ethics and the need to record for photographers taking war photos of appalling events, and often posing them to get a point across, a fine line here between conveying the "truth" and artistic licence.

Have you some monstrous events in mind for the rest of the 'Way' - you haven't got to the 'radioactive coast' yet, nor even the coalfields under the sea, nor Maryport and its most (in)famous trades - lots of scope ahead of you yet !

gimmer - The next post should have had me at Seascale, but I came up short of that - you will be reading about it.

I know there is much history to come, but I will only be reporting on what I actually see, and I have no sub-aqua intentions visiting coalmines and the like. I know you will understand, but many well meaning people are always telling you about things you should stop off and see, but on all my walks, I suppose governed by my personal approach, I am on a time schedule. One sets off in the morning with a fifteen to twenty mile route to walk, and in the case of a walk like this a train to catch at the other end at a specified time, or on a long backpack, a booking into a pub or b and b. And in the latter case leaving yourself enough time for an evening meal, domestic chores: washing clothing, researching and booking ahead for the next day (very time consuming), and writing up the blog. Theres is not much time left for sightseeing, I am not complaining about that. I do what I want to do the way I want to do it.

sorry to come back again - it was these monstrous events you were anticipating (nay, hoping for as subjects both of your colour casting camera and your pen !) that I was most interested in - I suspect they find you, with no need for sightseeing - e.g. holocaust, nuclear meltdown, press gang, armageddon, border reivers - you name it, they have happened to some degree along that coast !


gimmer - reminds me of a post here in March 2013 during my trek down the Lancaster canal with Pete when we came across a potential Armageddon. The post was enlivened by good comments including yours.

Hello Conrad. Loved your article on the Millom to Bootle Station walk. We're camping at Millom in a couple of weeks time and were looking for walks to do in the area. I'm thinking of taking the train to Bottle Station and walking back to the site. Can you tell me what distance the walk was, please. Keep up tyhe good work.

Darren - Welcome to my blog. Good to have a new commenter. The distance from Millom station (not sure where your camp site is) down the streets to the Cumbria Coastal Way and then the CCW from there to Selker on the coast and the short trek inland to Bootle station measures 15.4 miles.

I don't know if you have digital mapping, e.g. Memory Map or Anquet or similar but if you do you can download gpx files to put routes of most LDPs onto your map via the Long Distance Walking Association website. You need to sign up for a modest sum to do this but for me I reckon it is well worthwhile. If you click on a route at any point it gives you the distance from the start. You can also plot your own routes - all this can be downloaded onto a smartphone, android or Apple. I have an iPhone 6 major and an iPad mini and now rarely carry any paper maps. GPS is included so you always know where you are on the map. If you want any more info you can email me at conrob@me.com.