Every walk has its own character or one might say each walk generates its own ambience. Today we drove from Arnside in warm sunshine and blue skies. Arriving at Tebay broody clouds prevailed and when we stepped out of the car there was a wicked cold wind blowing from the east. Even though the sun eventually won the battle with the clouds that chilling wind persisted, half behind us on the outward journey and full in the face on the return. We both agreed that the characteristic of this walk was "unfriendly." I had come ill-prepared with just a base layer, shirt and a lightweight shell jacket and no gloves. Pete has trouble with cold wind making his eyes water. Although it was not wholly unpleasant with views accross to Orton Scar and the Howgills we were glad to get back into the car and re-group at Café Ambio. 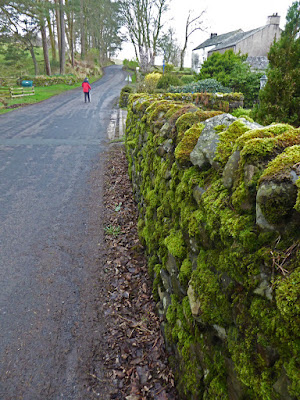 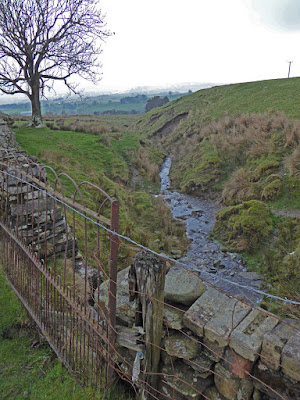 ---------------
I had a rant about the mini concrete damming of a spring by the National Trust in my recent post: "National (dis)Trust":
CLICK
and I emailed them. Here is their reply which to some extent vindicates their action. I don't have a degree in conservation or land management so I'm not really qualified to comment further with authority, except to say that all this "meddling" with nature does irritate me - it seems to me that if you improve habitat for a certain species you are likely destroying habitat for others.

I’m Ross, one of the NT rangers responsible for managing Arnside Knott.  The mini dam you’ve spotted we constructed last August when the spring was virtually dry in order to create a small reservoir of water.  We’ve then managed to put a 20mm alkathene pipe at the base of the dam and dig that in under the path and away down the slope.  If you’ve spotted the mini dam then I’m guessing you’ve certainly spotted the new water trough just up the slope from the vehicle gate on the bridle path.  The natural spring now feeds this trough.

Before the installation of this trough grazing was restricted to the far side of the site (i.e. the cattle didn’t want to stray too far from the water supply) but now they can explore this end.  You’ve probably noticed we’ve thinned out some sycamores on the scree slope and beyond had some contractors in thinning out the trees near where it becomes grassier.  This does a few things: it enables the sun to shine on the stone warming it for a variety of invertebrates including the southern wood ant, it exposes bare soil to the warmth allowing pioneer species such as wild strawberry and violets to establish and it links the grassy areas to the water supply, which will hopefully encourage the cattle to roam at this end of the site.

There are some Shetland cattle on as we speak and they’ll be there for a couple of weeks before being moved onto Heathwaite.  They’re a conservation species with the ability to survive on poor forage and, as I’m sure you know, are an essential tool in managing the site for the rare grasses, wildflowers, orchids and associated species that make the Knott so special.

Any other questions feel free to email directly rather than using the Morecambe Bay email as we only check that every week or so.

Hi Conrad, unrelated to this particular post but I owe you. Without your blog I would never have found the excellent 'How the light gets in' which would have been a sad omission. Thanks again...

Excellent reply to your email. The Leyland tractor i think is an 802. The number is usually on the front of the grill. Its unusual because most Leyland's are blue. They were and i think still are being built by Marshall's. This particular model stopped around 1982.

Whilst the land management schemes to encourage wider range foraging of cattle and spread of both fauna and flora, including scrub and tree felling, might be very sound, they not causally linked to destruction of the natural spring: there must have been many ways of providing a 'natural' supply to the trough without destroying this gem, whilst the land management could have been executed with or without the spring - or the trough - whose function is to encourage a wider grazing range (which of course can encourage some species diversity , although also threatening others !).
I'm afraid this illustrates your general point only too clearly (but here I must confess - I am one of the few people whose money the NT refused and expelled me from membership - for which crime, I was never informed)- an elite which doesn't either consult or inform the public upon whom the cost of the works bears and who previously had had the quiet enjoyment of the area .
Don't be shy - this doesn't need a degree in Land Management or Conservation to analyse - only simple logic.

Alan R - Well the best you can say is that they had the courtesy to reply with a reasonably comprehensive answer.

gimmer - Your opinion as a country estate owner is valued.

Dave - should have read "rewarding"

that reply needs at least one exclamation mark, if not several !

gimmer - multiple exclamation marks not allowed - see this extract from The Penguin guide to Punctuation:

Interesting email response. I must say, anything that encourages cattle to wander more freely does NOT sound like a good idea to me - but you know how I feel about cows!

Interesting to read their point about never leaving a space before ? or !
I find that it is actually necessary to leave such a space for the mark to be at all visible in emails and other screen text
- the French always leave such a space: I expect not to do so risks the wrath of the Academie, although not perhaps the guillotine (!).