Pete's wife Liz had an appointment at Lancaster hospital so I drove them both there for 8:30 am.  dropped Liz off, and continued the day with Pete, returning to collect Liz at 4:30pm.

At that time in the morning our first priority was for a bacon butty. Booth's supermarket café at Garstang provided.

Back at Galgate we walked up the road leading to Glasson Dock, but only as far as Conder Green. You would guess from the road's minor classification, and wiggly appearance on the OS map that it would be quiet,  but it was in fact busy, being the only practical link between the A6 and Glasson Dock. So we were dodging traffic, and at one point we were overtaken by a guy on a bike pulling a camping trailer.

Further on we came across the cyclist again repairing a puncture; he was French and had cycled from Plymouth so far. His plan was to see our Lake District, then Scotland, then, hopefully, to take a boat to Iceland. I showed off a bit speaking French, but his English was better than my French. This was the first puncture with his Kevlar enhanced tyres.

Our return route via the Glasson Canal was muddy in patches, but the sun was shining and Spring was in the air.

At the junction with the Lancaster Canal we turned north again and headed back to Galgate.

It was still far too early to pick up  Liz - our normal Friday routine is to drop Pete off at Liz's art class in Storth around 3:45pm. So we headed up to Williamson's Monument whose splendid green copper dome can be seen high above Lancaster from much of the surroundings. Unfortunately we were unable to ascend the monument due to ongoing repairs, but the views back down into Lancaster and across Morecambe Bay were impressive. The famous Pendle witches passed trough here in 1612 on their way to trial and for most, execution at Lancaster Castle.

We retreated to the café for tea and a cake. 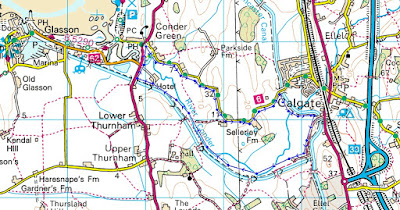 The green tinge is gone from the photos, which is particularly good considering how lovely that sky is.

Regarding the fourth photo down, it's guaranteed that walking past that point either Mick or I would have commented "Must have been a high tide".

The green tinge is gone from the photos, which is particularly good considering how lovely that sky is.

Regarding the fourth photo down, it's guaranteed that walking past that point either Mick or I would have commented "Must have been a high tide".

Gayl -If you look at my reply to Alan R on my last post "Slideshow" you will see the explanation for the green tint. I have now reverted to normal settings. By that refer to another multi-choice setting under the heading of "Scene"; on dull days I use the sub-heading "Scenery" and on bright days "Sports". The latter I think reduces aperture and increases exposure.

I was searching for a witty caption for that photo and was conscious of my feeble effort. I score yours (and Mick's) 9/10.

gimmer - The cyclist was a bit of a blogger's gift. I meant to eulogise a bit more about the junction of the Glasson and Lancaster canals. I don't know if others have the same disease, but when I see something on the map that seems to have some significance in the middle of nowhere I am motivated to investigate. That junction had a perfect canal hump-back bridge built with that last forever, canal architecture and the whole location had a satisfying feel.