It is only seventeen days since I last posted but I am getting anxious messages from fans wondering if I have fallen down a pothole or walked off the edge of Earth.

I have been busy with DIY. Firstly a new window in the rear of my garage which I made and fitted after being poleaxed seeing the likely cost of having it done professionally. I used up much of the left over decking timber I have been storing for several years (in case it might come in.) Construction involved seventeen pieces. I have a freestanding circular bench saw which enabled me to cut wood down to size with ease, but not without danger - I do still have ten digits on my hands. The cost of the window came in at £31.00 - £11 for some paint and £20 for two pieces of glass cut to size, 3 ft x 14in. each. 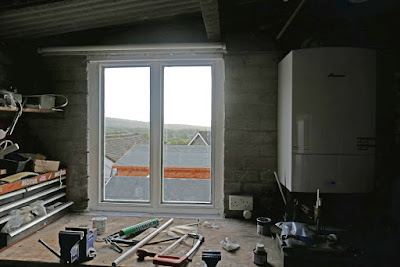 Next, I  bought a new shed to stand on decking Number Three which will serve as accommodation for my son W; I am in the process of insulating this which has been time consuming, researching methods, and obtaining materials, but it is now well under way.

On Tuesday I received a welcome phone call from Bowland Climber who comments here inviting me to accompany him and another friend J on a walk in the Bowland hills yesterday (Wednesday) and so DIY was put on hold.

BC made a brief reference to Hurricane Ali which has just taken out half of the USA and was reported to be now heading our way, albeit at  reduced  ferocity.

Our first objective was Parlick summit. I used to run up this hill and seem to remember a time of just under ten minutes. Today it took us half an hour, but only plodding of course, but the strong wind was behind us. The final section to the summit is seriously steep but we managed without stopping. On the lower section we did stop to watch a kestrel and possibly a peregrine, so it seems that the whole of wildlife has not yet been exterminated here in favour grouse and mono-diversity. ( I think that's an oxymoron.)

We walkers enjoy a good ridge after the labours of getting up there and so it was between Parlick and Fair Snape Fell. Hurricane Ali was blowing us along like clippers under full sail, and the views were wide ranging and somehow enhanced by the wild weather.

At Fiendsdsle Head we turned south-west to do what I erroneously call a descending contour on  a fine path looking steeply down into the bowl of Bleasedale. The wind was now coming at us sideways, then quite abruptly it brought lashing horizontal rain stinging into the face like mini machine gun fire. BC and J donned over-trousers and I tried in vain to fix the hood of my waterproof in place, but the wind just kept ripping it off. I was wearing Paramo Cascada trousers, supposedly waterproof, but the wet was forced straight through by the wind in an instant like broth being pressed through a sieve. We had about half an hour of this descending as quickly as possible in those conditions until we reached the valley bottom where the rain stopped, but the wind continued.

A rickety stile at a barbed wire fence gave both my companions problems, my father would have said it was "on the blink." I got halfway but couldn't get my now almost horizontal leg over. J was holding my body on one side and BC was trying to lift my leg over, then my sock became spiked on the wire, and all three of us were locked into a sort of sculpture not being able to move for fear of all falling over together with potentially dire result. By luck a loop of the wire lifted itself off its post and we were free to put the foot down and un-spike the sock. Twas all a bit embarrassing, but BC in his usual way was almost incapacitated by laughter - what good friends.

We carried on and stopped on the seat outside Bleasedale Church to est and drink. The church is dedicated to St Eadmer and I thought that may be of interest, but he doesn't appear to be patron of anything, and the best I could get from Wiki was:

As for Eadmer, apart from this brief moment in history in 995 AD, there appears to be no other trace and this unique dedication is his only memorial. The rest of his life is a mystery.

One would have thought they would have chosen somebody more interesting to dedicate their church to?

CLICK FOR LINK TO ST EADMER AND BLEASEDLE CURCH

The best day out I've had for some time. 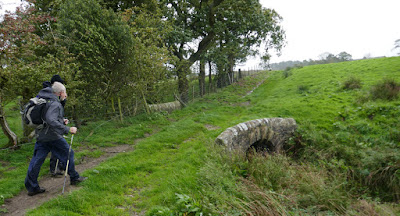 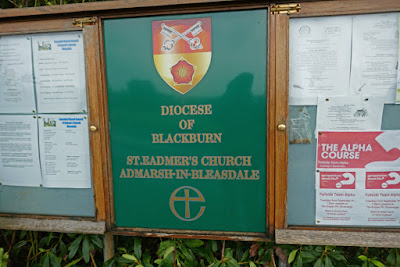 Enjoyed the day immensley as did we all.
Glad you mentioned things on your post I'd forgotten, kestrels etc.
You're plotted route is askew - told you to look at mine!
We'll something similar soon. Oh just booked for Cornwall.

Good to have you back -very tickled by the stile sculpture!

BC - The map has been corrected and should be substantially correct. I am glad about that because the route now does come in at 8 miles which my version didn't.

kendal grufties - Good to know you are following. I hope you got my emails regarding my absence.

I thought you'd been quiet for a while, but couldn't be sure that I hadn't just missed you in my blog reading list, which has been stacking up whilst I've been busily occupied with Hard Manual Labour.

You remember that house you stayed in when passing by Wolverhampton on your Boston to Barmouth walk 3 years ago? It's recently been vacated again, so has been keeping us busy getting it back into shape. I'm pleased to say that it was left in remarkably better condition this time around than when you saw it.

afoot - I'm sure you wouldn't be quite so impress if you had a closer inspection. The window is in the rear of my garage and from outside its bottom edge is about eight feet off the ground with the roof of a shed backed up to it, so it is in as inconspicuous location as possible, hence my decision to proceed with my own construction. When I was boat building my neighbour Dan was doing the same, and when I saw a rough, badly finished section on his boat he had a famous phrase, "it wont be seen, it wont be seen."

Gayle - is HML going to become a new acronym? I have fond memories of that house and more than that your welcoming hospitality and help during the days I passed through your domain. I guess you quite, masochistically enjoy a bit of challenging DIY as I do. It's a bit like long distance walking, not always sheer pleasure, but rewarding in its achievement.