My post entitled Holme has now clocked up 75 comments:

I have a sort of obsessional aversion to driving on part of the route I have selected before we start, on the grounds that it could spoil the enjoyment of discovering points of interest and views to be gleaned on the walk. But finding somewhere to park on narrow country lanes sometimes makes that inevitable, and so it was today. We had to drive about a third of a kilometre on the B6254 which was part of the short section of that road on our walk. My obsession also extends to objection to a there and back rather than a circular, but Pete has pointed out that you get a different view on the way back, and he has no empathy with my problem, and that has tempered this second obsession for me to some extent, which is fortunate because I have just about run out of circular routes that match our required parameters.

Shortly after our start we passed through tiny Beckside and glancing upstream from the bridge over the infant Peasey Beck we spied a half decent waterfall tantalisingly half hidden in the trees - it was more reminiscent of territory close to the Lakes and a pleasant little surprise, and I was glad that I hadn't noticed beforehand the it is marked on the OS map.

However narrow and purposeless are the little roads that we walk on there is always some traffic these days. We had to get off the road onto uncomfortable grass verges every now and then for passing vehicles. On one very narrow lane we had a tractor-unit pulling a huge, empty low-loader, and as it carried on we saw it confronting a farmer's tractor coming the other way laden with hedge cutting machinery. The tractor skilfully diverted off into a field and so pas de problème, but oh, why didn't I remember to take a photo. As we continued we were walking on a carpet of chopped up multi species of hedge clippings. Apart from a  number of private cars, heading who knows where in view of the very few habitations in the vicinity, we now as always  were plagued by home delivery vans. I can't complain about those because I am as guilty as others of buying on t'Internet.

I have over dramatised to some extent the volume of traffic, but it is becoming more and more noticeable on these little roads. The one exception that we don't object to is the little red Royal Mail van - it usually  passes us somewhere, disappears up a rough farm track, and then passes us again on its way back, always with a friendly wave, and even more emotive today with the passing of Postman Pat's creator John Cunliffe the other day.


AS USUAL WORTH CLICKING ON FIRST
PHOTO TO SEE ENLARGEMENTS 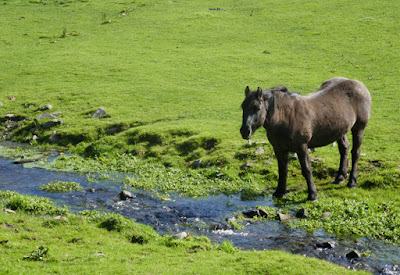 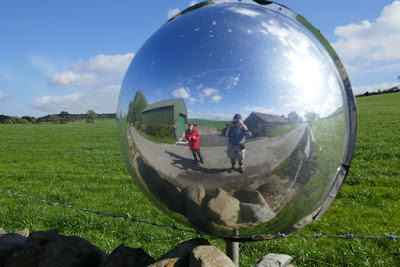 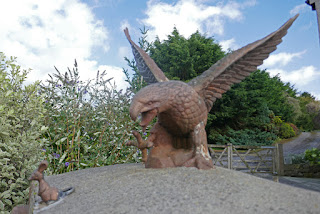 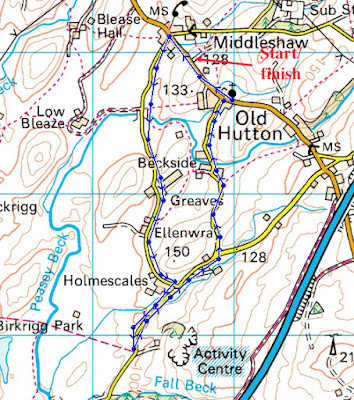