At the Dog in Dunley I negotiated breakfast for 8:00 am versus their normal at 8:30. At 8:00 all was locked up. No sign of life. At 8:30, yes I'm very patient, I phoned the pub number as I sat on the stairs outside the locked dining room. Eventually the boss arrived and later a girl not resident arrived and they concocted breakfast for me, so I was not off until 9:15. Local footpaths turned into a nightmare. I ended up in another horsey farm fenced into separate fields with me removing rucksack and squeezing between rails and electric fencing until I was assailed by the niece of the owner. Once out of that lot another footpath ended in inpenetrable hawthorn and bramble shrubbery. I retreated and took s longer route than intended. Once on the  Wodrcestershire Way all was plan sailing and delight but lost time meant I had to hurry.

In recompense when I got the bill at the Dog it was only £58 for dinner B and B - they had missed off a pint and a half of beer and I didn't bother telling them in view of the breakfast debacle.

Oil seed rape is in full pomp in the most enormous fields I have seen anywhere in the UK. Walking kept a lot to ridges, but wooded with only intermittent views. It's all much more hilly now and this was a strenuous day, but the rolling, sparsely populated countryside is stunning.

I am now in th Talbot at Nightwick. It has been eulogised by a couple of people I met on the way proclaiming good food and their own home brewed beer. On arrival the whole place was heaving with people inside and out. It was almost impossible to get to the bar. There were many tables, many with families and one with the most piercing screaming baby I've ever heard. At the bar there were three different groups of males standing swapping tales loudly and endlessly laughing with that pointless laughter. Everybody in the place seems to be shouting. All in all I have endured an inferior fish and chips (only coley) and soggy chips for £16 in the midst of all this cacaphony. I looked at the pudding menu and gib bed at £6 a go, especially as the man course had not given much confidence.  The home brewed beer  was good. 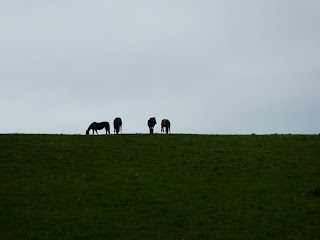 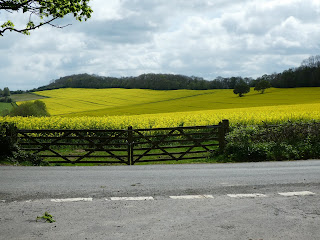 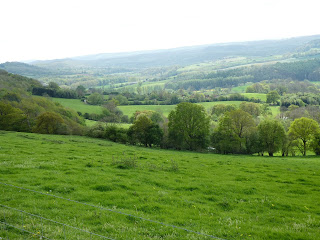