At six am I was taken by surprise when I went to retrieve my boots from the car - all was frozen.

At seven am I had a clear run to our researched parking spot north of Grasmere on the A591. BC was ten minutes or so later and was caught up in the Windermere morning rush to work gridlock - what a difference a few minutes makes at that rush-to-work-time in the morning

BC arrived and we had the usual hairy drive up and over The Struggle to start at Patterdale.

I have mixed emotions about Patterdale:

2010 - July - I was walking "Furthest East to Furthest West" (Lowestoft to St. Bees Head.) Descending Nam Bield Pass I fell and cut a vein in my shin and managed to bandage up and hobble down to Hartsop and to Patterdale where I booked in at Patterdale  Hotel for my second time. The walk had to be abandoned and was re-christened The Broads to the Lakes - pity. For a blow by blow account of that momentous twelve hour day:
CLICK FOR BLOG POST

2011 - September - Patterdale was the finishing point on a walk that proved to be a hill too far and having me walking out with excruciating cramps in my thigh - see blog post:
CLICK FOR BLOG POST


Here is a copy of our honeymoon bill from The Patterdale Hotel - 21st. June 1970 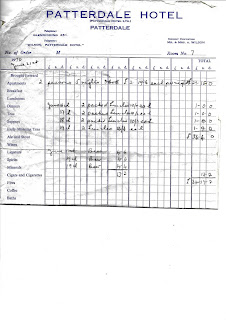 It is difficult to read so:

We had some amusement passing Patterdale church with a notice advertising free Wi-Fi.:

Parson "Here endeth the first lesson on how to access www.jesus's dad.co..."

Nick Burton whose Wainwright's Way we were following gives the options of going over the tops via St. Sunday Crag or walking up Grisedale, we chose the latter. Unfortunately the valley remained in frosty shadow until we were much higher up. We had our first sighting of snow on the rim of Nethermost Pike.

Our conversation is always wide ranging. At one point we were musing about coffin routes which were established in olden times when coffins were carried over into the next valley to access a church for burial. BC was telling me that one can see large stones on some of these routes where coffins were laid whilst the toilers took a rest and I imagined the ensuing conversation halfway over The Old Corpse Road from Swindale to Mardale in 1650:

Toiler Two   "Blow this for a lark. Let's cremate the so-and-so here"

We spent some time viewing Eagle Crag with BC reminiscing about his several climbing visits there.

As we we arrived at Ruthwaite Lodge  we were in sunshine at last and there were several parties about; we pressed on.

A deep cleft took our attention on one of several crags up on our right and we wondered if it had been recorded as a climb. See the photo below. I should have marked its exact location - the photo shows chockstones and an even deeper penetration into the crag than was obvious from our viewpoint - all enticing and interesting.

After a stiff climb Grisedale Tarn comes into view as a welcome sudden surprise. Here we watched a family party across the way ascending Dollywagon bringing back painful memories of the walk in 2011 referred to above:

"...descending from Seat Sandal I was tired, and both knees were moderately painful. The constructed stone stairway up Dollywagon Pike was sapping in warm sunshine..." but it got worse after that.

Going over the col between Fairfield and Seat Sandal there was  biting cold wind, but further down we lunched on the edge of the path in warm and windless sunshine with frequent parties passing up and down.

The long descent on tricky constructed path alternating with rocky natural path needed care and we took plenty of time.

Cars were everywhere on our drive back to Patterdale, lay-bys full and queuing into Ambleside. We had several interesting meetings with cars coming the other way going back over the Struggle. Another good day pinched from the weather forecast. 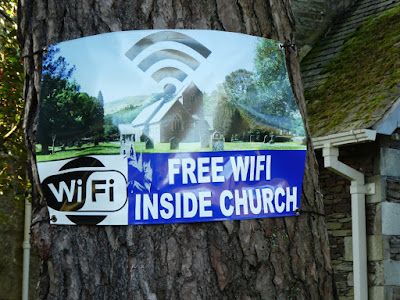