The last (planned) walk before Lockdown with BC targeted three trig points starting from Hoddlesden. I had left my car keys in the house after earlier going out to start up leaving the engine running to de-frost. Arriving at Hoddlsden the car could not be re-started without those keys and I ended up returning home on the back of a Green Flag low-loader.

My plan for arriving twenty minutes early and having a swift coffee from my mini-flask before BC arrived was slightly thwarted finding him already there and well into his own coffee.

In my last post I commented on my impressions of this area. Hoddlesden itself is an iconic Lancashire mill town with old buildings well cared for and renovated and a delight to wander round. The surrounding moorland is wild and attractive but farming has neglected much of the upkeep. with broken walls, unsightly rubbish tips, paths laid with  broken bricks, masonry and waste hardcore.Access can be a problem and it is not unusual to find footpaths fenced off with barbed wire or locked gates.  For the first hour after leaving the pleasant atmosphere of Hoddlesden we experienced much of what I describe above. But two or three kilometres after the first trig at Rushton's Height the scenery became more attractive.

We climbed to the second trig where a party of three were just leaving. We descended through a strange area of woodland with twisted well spaced trees promoting a kind of magical feeling - I half expected to meet a Jabberwocky. We found a good wall to sit on at a mysteriously ruined building in the midst of those trees and we lunched in comfort and warm sunshine. Descending to Calf Hey Reservoir we picked up the Rossendale Way, then we had a prolonged period of cold heavy rain but thankful that we had taken our break before the onset. A good climb out and the crossing of the busy B632 Grain Road followed. A short climb and more challenging barbed wire took us to our third trig, then descent and final footpaths to enter Hoddlseden again by the backdoor.

That was a good day in good company and such a pleasure to be out and exploring new territory again. 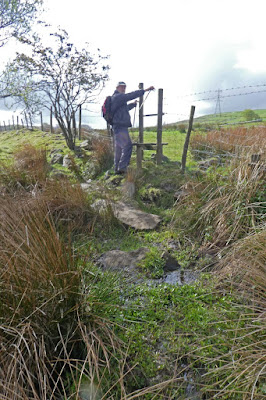 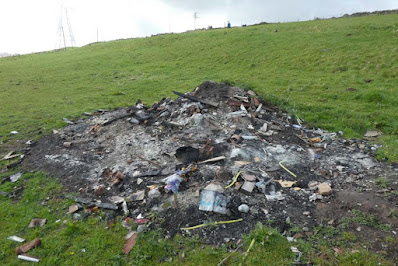 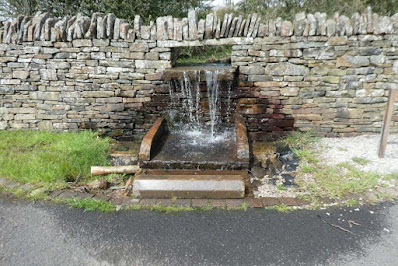 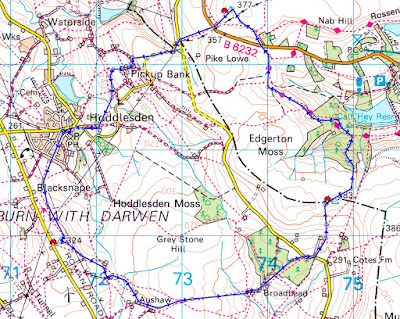