I have plotted onto Memory Map all the Caravan and Camping Club CLs relevant to my proposed walk round the boundaries of Wales which henceforth will be called “WelshWalk”.
All the CLs occurring on each 1:50000 OS numbered map are listed in the club's guide. A six figure OS grid reference is given for each CL prefixed with the number of the OS map. Unfortunately Ordnance Survey have a different set of sheets in their system in addition to the map numbers.These sheets are identified with two letters. To plot an OS grid reference on Memory Map the two letters have to precede the six figure number. There can be parts of more than one of the OS’s two letter  sheets on each numbered map so when plotting from the Club’s guide you have no way of knowing which are the correct letters for the given grid reference for a particular site, and you have to proceed by trial and error. On the example herewith map number 84 includes parts of sheets NX and NY. 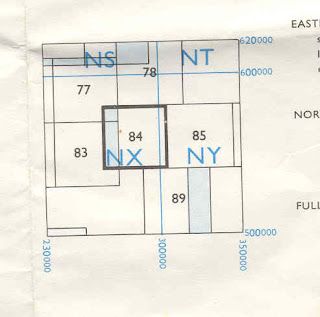 It took me a day and a half to plot the sites. If the club had thought to prefix their grid references with the letters instead of the map number I would probably have saved half a day. I have written to them making the appropriate suggestion. The club  don’t seem to have a facility for email  on their website so I had to use snail mail.
The maps have all been printed onto101sheets of A4 which weighed 511g, but after trimming blank areas this was reduced to 361g. I will  post half the maps  to a camp site halfway round the route.
Posted by Sir Hugh at Tuesday, November 09, 2010