Just a quick update on the picture.

I have been away for a week so have not had a chance to do much more, but you will see that I have now put the walking figure in place and the path he is on.

For any newcomers the picture is part of the refuge complex at Thines in the Cevennes from my walk of the French gorges.  Here is an extract from my journal describing my visit.


The approach to Thines was sensational. On arriving the gîte is located alongside the ancient church with a dividing wall and gate through into the gîte. There is a notice to say the guardienne does not arrive until 7:00pm. No meals are provided but food can be bought and there is a good kitchen. Just below the gîte there is a little gift shop and café so I went and had a cup of tea and some biscuits. The tea turned out to be Earl Gray which I had without milk or sugar, and I found this to be one of the most refreshing drinks I can remember.
I had a good look round the village including the very old church with many grotesque stone carvings and an atmosphere reeking of medieaval church domination.
Above the village is a large carved stone memorial to yet more resistance fighters who died in the war with an information board alongside in the manuscript writing of the sculptor describing his deeply emotional feelings whilst he was creating this work.
It was a long wait until 6:45 when the lady guardienne arrived, and by this time there was a party of three young French lads and another middle aged Dutch couple who had arrived. Whilst I was paying for my lodgings I noticed that the others all seemed to have bottles of wine and realised that they had bought these from the shop below as the guardian did not sell wine. It was now 7:00 and I knew the shop closed then so I asked the guardian if I may be excused before continuing with my food purchase, and I rushed off down the steps to the shop. The door was closed but I knocked and was allowed to go in a purchase a bottle.
On returning the guardian took me down to a lock up room below the gîte which was her food store room with fridge and freezer. I bought some spaghetti, a jar of bolgnese, some cheese, bread, jam and butter and a tin of fruit and some tea bags.
Back in the gîte we prepared our separate meals, but ended up all sat at the same table eating and drinking together and the company with the three mischevious French lads and the good humoured Dutch couple was very agreeable providing a merry evening. 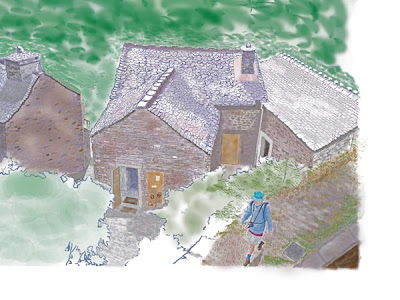