The journals for my 35 day GR5, and my 35 day French gorges walks are now available on Lulu either as a download or a hardback book – see details in red below my profile.


Due to an error in downloading the template from Lulu the size of the GR5 book is smaller: 6 inches x 9inches compared with 8.25inches x 10.75inches, but I was pleasantly surprised with the result. 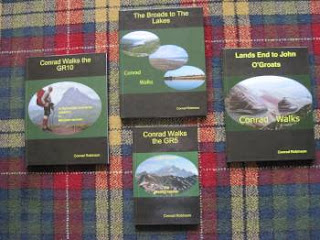 Plans are afoot for next year’s backpacking trip. The concept is to follow the national boundary of Wales as closely as I can within reason, using footpaths as much as possible, and not being concerend about which side of the border I am on at any one time.
So far I have plotted the route on Memory Map which totals 1561km. The route is plotted in straight lines, and tries to avoid obscuring the printed  footpaths  and roads on the map, and does not follow all the twists and turns. I guess the true distance will exceed the 1561km by at least ten percent.
The next task is to re-join the Camping and Caravan Club and identify and plot onto Memory Map any of their CLs that are near enough the route to be useful. I am a member of the Caravan Club, but most of their CLs do not cater for tents whereas the converse applies to the C&CC. When that is completed I can then print the route  onto sheets of A4. I find I can get ten kilometer squares by six on one sheet which gives some enlargement on the original map.


I have just bought a pair of Inov-8 Roclite 400 GTX boots which I am going to try and save for the Welsh walk, although I will give them a try first. Some kind of review will follow.