There have been few occasions when I have sought permission to walk on private land.  BC pointed out that so far we have not strayed more than a kilometre from our straight line; that is by chance rather than pre-planning, and it has kept us within the spirit of Nick Crane's Two Degrees West. BC suggested that we now attempt to keep within that limit for the rest of the walk.

Look at the first map below. It encompasses the Quernmore estate. To avoid that private land the only possible diversion would take us well beyond the one kilometre limit, and all on roads, and including a long section of the busy A683 - all  more or less unacceptable, and certainly a route we would have no enthusiasm for.

We had debated various possibilities for traversing the estate but without reaching a definite plan -  less said about that the better.

On this day we met at the lay-by opposite the southern entrance to the Quernmore private estate road where today's walk would finish. Whilst we were weighing this up and reading the notice a car pulled up and conversation revealed the driver to be the daughter of one of the  house owners in the  estate and we were given the name and phone number to contact to ask permission to walk through. Today I followed that up and permission has been granted. It is remarkable that our straight line has enabled us to plot a route largely on footpaths and with bridges over the major rivers: Wyre,  Lune and Ribble, and still remaining within one kilometre of our line. I have tried this with other straight line possibilities and it is rare to be able to stick so close to the line - my unfinished Berwick-upon-Tweed to Castle Carey is a good example (I hope to continue with that, provisionally after Easter next year.)

For this walk please read the captions under the photos. 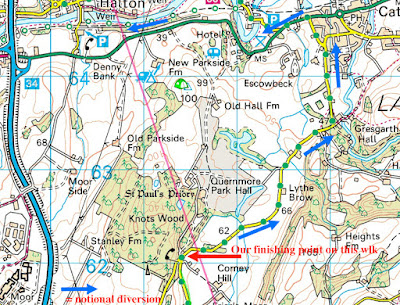