Friday 14th December 2018
Today granddaughter Katie was appearing in the nativity play at Chetwynd primary school where daughter Jill teaches as Head of English in the senior school. I was invited to spend the whole day sitting in on three lessons and one staff meeting. It was an enjoyable and enlightening experience.

The depth of analysis was pretty thorough and brought forth some good input from the pupils. They were all well behaved and responsive to the lessons.

The message of the poem is one worth heeding? Whatever one's thoughts are about the religious aspect of Christmas it is supposed to be the season of goodwill and human kindness rather than a huge dose of consumerism.

Alternative Santa: A Christmas Poem
By Roger McGough
‘I’m fed up looking like Father Christmas,’
Muttered Father Christmas one year
‘I need a new outfit, I must move with the times
So for a start, it’s goodbye reindeer’
He googled Alternative Santas
And was amazed at the stuff that appeared
He got rid of the holly-red costume
Had a haircut, and shaved off his beard
Spent his days in front of a computer
In a cave hollowed out of the ice
Wearing a tee shirt emblazoned Merry Xmas
And jeans (Amazon, Armani, half price)
Couldn’t wait to straddle his snow-ped
(The bargain he’d bought on eBay)
A rocket-powered silver toboggan
His supersonic sleigh
Then one morning he thought, ‘Oh why bother
Delivering presents by hand
When it could all be done online
Busy parents will understand
We are lucky to live in a digital age
Where the aim is access and speed
SantaNet I’ll call the system
‘Santafaction guaranteed’
And that was years and years ago
Times that children barely know
Midnight mass and mistletoe
Christmas carols and candle glow
Sleigh bells ringing across the snow
And Santa singing Yo ho ho
For that was years and years ago
And that was years and years ago.
*****************************************
The grand finale for my day was of course the nativity play. A while ago Jill sent me and her brother Will simultaneous messages asking us to guess which part Katie had been given to which we both replied simultaneously without collusion, "The donkey."
The play was loosely based on the Nativity, but also as a spoof on Strictly Come Dancing, and Katie, as the donkey, was one of the judges, which included a lot of speaking and some dancing. The whole show was priceless, and as all doting grandparents say, my granddaughter was the best, especially in a group dancing finale. Unfortunately photographing the children was not allowed.
Chetwynd is a school with friendly staff and a happy atmosphere with well behaved and attentive pupils. It was all a pleasure to witness. 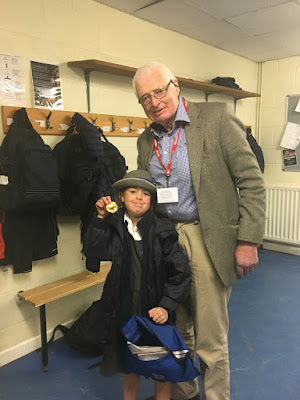 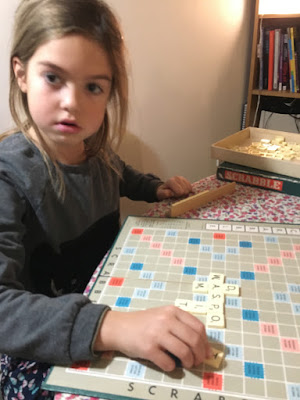