I thought this would be mostly on a busy B road with no walkway and was not particularly enthusiastic. One and a half kilometres from Overton a track lead to Heaton Hall Farm not shown on the OS 1:50 map. I looked at the 1:25 and the track was marked and shown as going past the farm but then terminating before continuing after a couple of hundred yards on the way to Richmond Farm where the track continued back to the B road further north. That looked more pleasant, but this was not marked as a public footpath and there was the question of the gap in the road which from experience I knew more than likely would indicate some impassable obstruction. This is a dilemma one is faced with from time to time on such walks - if you proceed and access is forbidden or the obstacle appears you have to eat humble-pie and retrace your steps - it is just a gamble. I gambled.

I met a friendly girl as I walked into the farmyard and she told me that the tarmac road continued all the way. I'm pretty sure that was the case at the date of my OS map from what I saw so they are not always perfect.

That tarmac lane with its views and no traffic made this walk into something much more enjoyable than I had hoped for, especially as I had won my bet.

A little used road took me past the Golden Ball Inn nicknamed Snatchems. The navy in the 1700s sent the press gangs here to forcibly recruit sailors. Just imagine having a quiet pint on a sunny afternoon when some bully boys turn up, bundle you into a van and you spend the rest of your short life working on a cocaine farm in Peru.

Just before arriving at the inn there was a disgusting pile of fly-tipping on the road. It can't be just a matter of dumping the stuff - it could just as easily have been put on the grass verge but I reckon there is some kind of demonstration or act of defiance here as well - one wonders who these people are - I have my own ideas but not to be published here.

Earlier I had been nearly mown down by  a two horse trotting trap.

Another track lead off alongside the River Lune and this again turned out to be tarmac but closed to traffic. A massive landfill site on the left was being added to by a continuous relay of wagons and there were signs warning of "inflammable gas" on the fencing - good job I hadn't taken my stove for a brew - headlines:  "Arnside pensioner blown to bits on Lancaster cycleway."

More and more as I walk I criss-cross with previous adventures. I had a distant view of the Ashton Memorial above Kendal where I passed through with BC on the Lancashire Witches Walk - the witches were hanged there. Looking across the River Lune I could see the new housing developments I walked past recently with Pete on our way to Glasson Dock, another venue where I have walked around often. I passed under the pylons made oversize to take the electricity from Heysham Power Station over the river which reminded me of the similar arrangement over the River Wyre when I walked the Wyre Way. - I will be connecting up with that route later with this project I hope. Whilst all that is pleasurable I am looking forward to getting onto less familiar ground. Seeing "what is round the next corner" satisfies my nosy-parker instinct -  one of my main motivations for walking.

Ever since that walk with Pete along the other side of the Lune I have been itching to cross the walkway on the bridge taking the main line railway over the river Lune. The steps up and down at each end came as a shock after all the level walking.

I sat on a bench after that and had my refreshments and then retraced my way back to Overton. 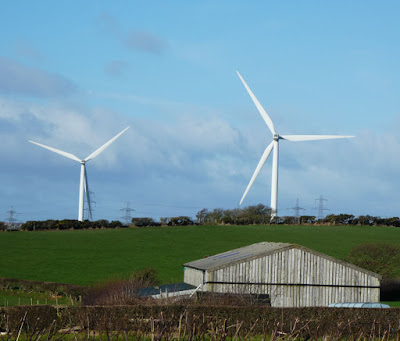 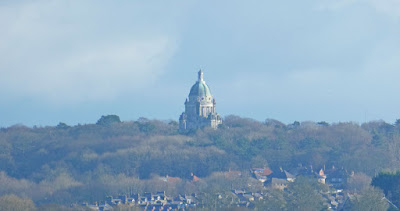 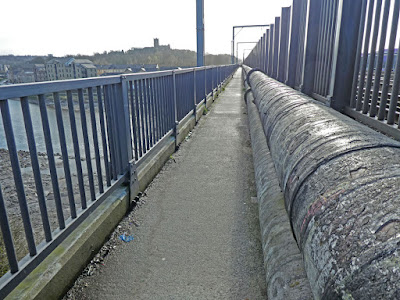