On the previous section I had intended to walk as far as St. Annes-on-Sea but bailed out at at Starr Gate tram terminus for deteriorating weather and time constraints.

Today should have been my Thursday walk with Pete. During the night I had developed a literally STREAMING cold but with no feelings of illness or temperature. I phoned Pete and he was emphatic about not wanting to be blighted, but it was now later than I would normally set off on my coastal campaign. But, including those extra 2.5 miles to St. Annes on the next section to get me to Freckleton would have involved 11 miles plus, so I decided to knock off the 2.5 miles so I could be more relaxed for the eventual section to Freckleton.

I was able to park in a side street at Starr Gate. I thought I would be walking down the main road but a path lead off into sand dunes in the direction of the coast so I followed but anticipating endless difficult one foot forward one foot backwards sand dune walking, but after some such quite arduous uphill I dropped down onto the beach and walked all the way to St. Annes on glorious firm sand. Huge rolling white clouds against deep blue sky and wild sea on my right and wide expanses of golden sand stretching into the distance made for enjoyable seascape walking. Again I was well clothed and well protected from the cold wind. A kite surfer was busy preparing his kit - at one time I might have been envious, but these days I value more my comfort.

Dog walkers were numerous, some a long way out on the edge of the breakers and looking vulnerable. All the dogs seem to have an endless appetite for chasing and fetching their balls. I remember my Springer Barney preferring to find the longest possible branch he could manage then using at as a scythe to fell you from behind.

I could see St. Anne's pier in the distance and as I drew nearer it looked run down but apparently it is till active which is not bad to say it has survived storms and raging sea since 1885. 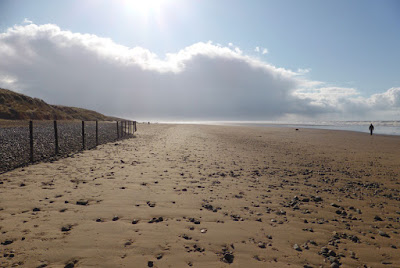 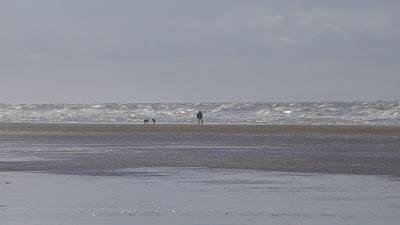 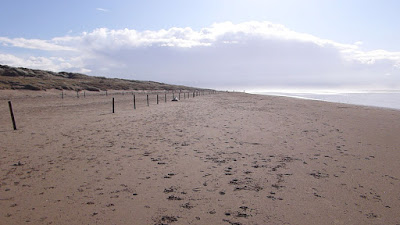 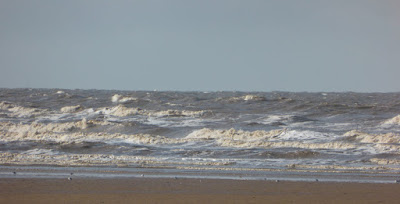 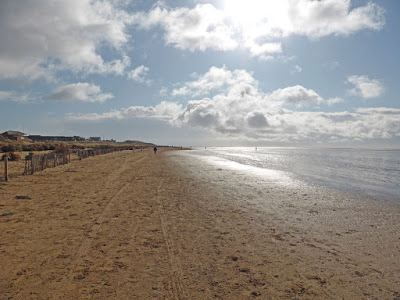 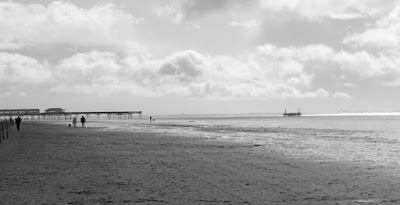 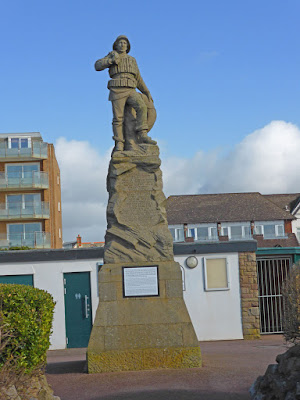 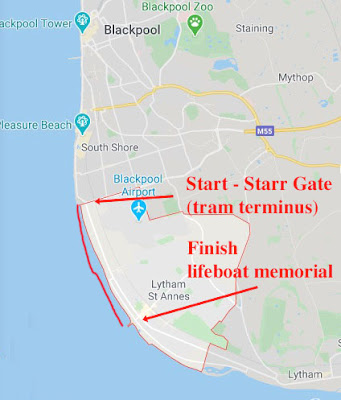 I walked as far as the lifeboat station and recconoitered the car park there for next time. Here there is a fine statue of a lifeboatman looking out to sea, high up on a good plinth.

The plaque describes the worst RNLI disaster ever in December 1886 (see my transcript below.) The thought of those men and their selfless determination to save lives with the knowledge that they may likely sacrifice their own had me feeling emotional and as I type now just having re-read more carefully I am moved again to a tear. Just imagine launching out in what were open rowing/sailing boats in a full gale in December at night. That is true braveness.


The Mexico lifeboat disaster was one the RNLI’s worst-ever tragedies. It was a German cargo ship, a barque that was wrecked in a full WNW gale off Southport on 9 December 1886. It was on its way from Liverpool to Guayaquil in Ecuador,

Fearing the vessel would be blown on to the sandbanks to her doom, the Captain sent out distress signals. The Lytham, St Annes and Southport Lifeboats answered the call. They rushed to save the crew of the Mexico – which by this time was being blown down the River Ribble.

The Eliza Fernley lifeboat was launched first from Southport, and that capsized, losing 14 of the crew of 16.
Shortly after the Southport lifeboat was launched, the St Annes lifeboat Laura Janet set sail. No one knows exactly what happened to it – except that the next morning the lifeboat was found washed ashore. Three dead bodies were still clinging to it, and all the crew of 13 men were lost.
A third lifeboat, the Charles Biggs from Lytham was also launched. On its first rescue they successfully saved the twelve crew of the Mexico.To date this is still the worst loss of RNLI crew in a single incident, with 27 men lost.
16 widows and 50 orphans were left behind. An appeal was launched to raise money to help them, and for a memorial. It was this fundraising which led to the first RNLI flag days. Generous donors included Queen Victoria and Kaiser Wilhelm.
Posted by Sir Hugh at Friday, February 28, 2020