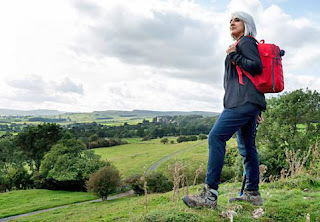 Global warming, flora and fauna extinctions, the political news, and  health threats are just a few of the depressing  things we face on a daily basis and that doesn’t include domestic and personal worries that most of us have to a lesser or greater extent. I try to take a responsible attitude and keep myself informed and make some contribution wherever I can but still feel guilty because I know I could do more.

But every so often one needs to switch off. Benign but quality tele is rare but it can provide some constructive escapism from time to time - The Repair Shop on BBC was a recent such avenue but more recently I have been watching Yorkshire Walks, BBC2.

Artist Shanaz Gulzar films herself walking in the Yorkshire Dales. That region is for me the most attractive countryside I know of anywhere. Shanaz carries a three hundred and sixty degree camera on a pole to film her surroundings - enhancing shots are made presumably from a drone. There is no background music but all the sounds of wind, water, birdsong, crunching feet on footpaths, and occasional conversation with passers-by are there instead and in between those sounds and Shanaz’s occasional commentary a peaceful silence prevails that underlines the beauty of this white limestone, green grass, blue sky terrain along with that seductive brown river water that despite its colouration enables you to see down deep.

Shunaz speaks simply without flowery language about what she feels and sees, and as an artist shows us oddball tree roots and moss and the like which when viewed as a self contained entity provide interest and pleasant contemplation when all too often we pass by without seeing.

One might criticise for an absence of dire warnings of planet trashing, and lack of mention of species under threat, but I welcome an occasional break from the gloom and doom.
Posted by Sir Hugh at Thursday, February 13, 2020