Rain was forecast for later in the afternoon so I was up at 6:00 and walking from Preston Portway Park and Ride by 7:50 am with eleven miles to do before the rain came. The bus stop for my return  to Preston was about quarter of a mile down the busy A 59 and as I trudged carefully down the grass verge I was fearful of seeing a bus coming my way before I arrived at the stop. All was well. I only had to wait three minutes, and the rain just started before I boarded.

I was reminded of one of General Patton's maxims: The Six Ps:

Practice in my case in the sense of method.

I crossed the Ribble from preference by the Old Penwortham Bridge which is now just a cobbled footpath. Immeditely opposite the other side was an enticing looking coffee shop but I am concerend about Coronavirus and much as I would have welcomed a coffee I pressed on to find the footpath which would follow the Ribble almost until the river arrives at the sea.

For half a mile or so a tarmac road passes through landscaped parkland apparently refurbished from a coalfired power station operating back in the mid 1800s. That road then became a gravel path, then an earth path with muddy patches in places before emerging onto wide grass river banking making for pleasant walking and a whole new view of the River Ribble.

In one area there was a profusion of molehills. One in particular was much larger than the others. Was this the royal residence, or a mole hotel, or pethaps their version of the Albert Hall - I couldn't hear any music?

Where I could see the Ribble meeting the sea in the distance the banking swung to the left until I arrived at a footbridge and a bench where I had my sandwich and coffee. From here I had some wandering before getting back onto the proper path and continuing on river banking following the River Douglas and then a short link to the A59 to catch my bus

Dingy photos on a dingy day. 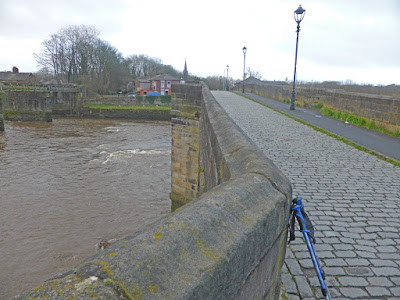 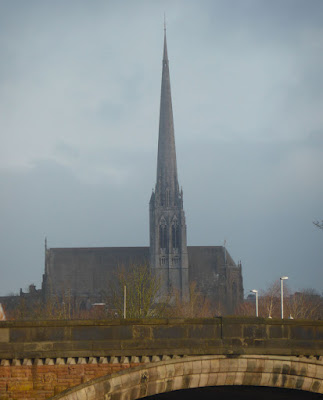 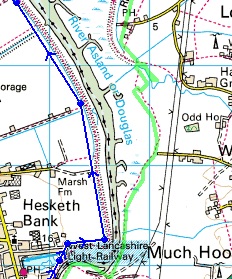