My reaction to the C thing is of course to comply with the strongly forced advice but to drive to remote locations to do obscure circular walks without visiting cafés or whatever.

I know everybody doesn’t agree with the methods the UK government are applying but at least it is a plan that in its own way will tackle the problem and we are now stuck with it and must responsibly try and make it work as well as it can. This not just a matter of self preservation but importantly also not passing C to others when we are living in cuckoo-land seeing ourselves healthy before the eruption of the virus which we are unknowingly carrying - a point that seems to be lost on  some members of our population.  I am no fan of Johnson by the way.

I suppose Wild Boar Fell is hardly an obscure objective but this was planned the day before the latest request to self isolate for the over 70s was announced. That was only after I returned home, and I had been trying to conform along with the previously suggested advice. I had already opted out of a meeting of my book club where the remaining members were continuing to live in denial along the lines I mention above.

It seems Wild Boar is, sort of topically, a subject of some contention:

This is also a Marilyn and I have climbed it a couple of times before but from the other side. On the last occasion I was descending the obvious ridge of Swarth Fell and I must have stood out prominently as an RAF jet came across just above my head and waggled his wings.

Today wind was my biggest problem. It was strong, but I have known stronger, but this was unceasing throughout the walk and it got to me. Somehow wind makes simple things difficult like taking photos or stopping for the usual faffs including the sandwich stop, more so than other kinds of inclement weather. I have to say it spoiled the outing today. Most of the route was over pathless moorland and fairly hard going and I wouldn't recommend it to others. I found nowhere except perhaps the summit shelter to stop for my sandwich and coffee, but the wind was so strong on the top that I departed by something akin to a dyno move in rock climbing terms (just touching as one passes on.)

I was glad to get back to the car where I had my food break in comfort wallowing in the anticipation of a hot bath back at home.

It was in fact a good sunny day which doesn't seem to be reflected by these photos.
Nevertheless it's worth a click to enlarge 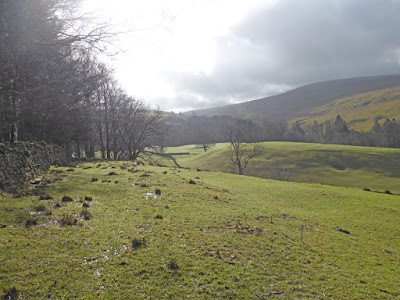 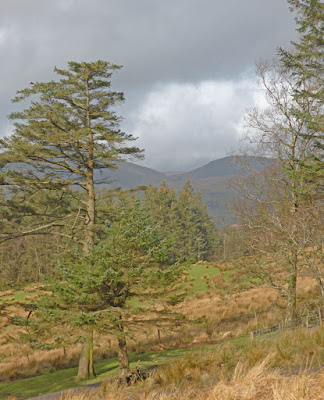 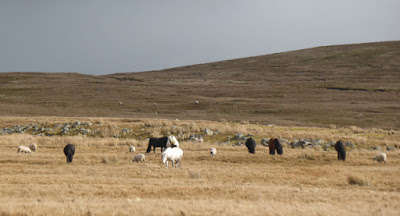