I lived in Preston for many years. Walking down the seafronts at St. Annes and Lytham today reminded me of, well read on...

After paying £4.50 to park for the day at the car park near StAnnes lifeboat I was off at 9:30 am in good weather but still needing layers and headgear to keep out the biting wind. As I approached Lytham the beach path was closed off and I had to divert back onto the road. The reason became apparent:  much sea defence work is afoot.

A cormorant posed whilst drying its wings on a jetty at Fairhaven Lake - ok, it may have been a Shag but I think the wing spreading is more characteristic of the former.

I spotted a number of litter pickers on the beach and met their leader coming rowards me up the prom, on the way to "round up her flock" as she said. We chatted and she identified the distant horizon across the bay - I had wonderd if I was looking at Liverpool, but it is Southport - that looks an awful long way away but I will be there 'ere long. I was told that Liverpool can be seen further round to the right "on a clear day."  It was pretty clear today but no show.

The Ribble Cruising Club i.e. sailing club loomed to jolt my memory. With my late brother Nick we raced our Merlin rocket dinghy back in the 60s. Here at an open meeting there were two races but because of tides we couldn't come back ashore in between and the sea was decidedly choppy. I reckon we spent about five hours out there and when I stepped out onto the landing stage afterwards my legs just collapsed like jelly.

Further, on the other side of the road, another memory was triggered by the Clifton Arms Hotel. In my erstwhile occupation I took customers for lunch from time to time. On one such occasion I took a prominent Fylde businessman and his attractive wife to the Clifton. They were good company and we had a throughly enjoyable meal. As we were getting into our respective cars Mr. B said to his wife "We're just going back to the factory" she replied "No you're not, you're coming home with me'" That was perhaps my most successful business lunch ever.

The England Coast Path seems to be getting a few mentions recently; I encountered the first way-marker I have seen - a superb substantial cast iron affair pointing to low and high tide options. I chose to walk by the high having been lead to believe flooding was likely on the low option. I think there will be endless work to establish the whole of that path - there are many places where one is  froced to come inland a long way, but where permissive paths may be negotiated to stay nearer to the concept. Having said that I walked the whole of the Welsh coast just before the official path was opened and I had a feeling of satisfaction that I had done my own thing, but I am not decrying the formation of good long distance paths. The ones I am not enamoured by are where some local authority has connected a lot of inferior paths round the edges of crop fields with no particular objective other than perhaps encircling their borough or domain and claiming this as The Whatevershire Way.

I walked up one side of Lytham Dock boatyard to the road then back down the other side on a banking path by-passing the road. As I heard the tinkling of rigging on the metal masts in the wind  I estimated that perhaps eighty percent of the forlorn craft were in such dilapidated state they were never going to sea again. Owners must be paying for their berthing - so how long do the owners continue paying, and how do you dispose of such a thing when it is scrap?

The banking path lead to Warton Bank, but I had been told the path beyond skirting the south of Warton airfield was also flooded so I was back to road walking through Warton to the far side of Feeckleton for the rest of the walk. Emerging onto the A584 I turned left for only about thirty yards and waited four minutes for a bus back to St. Annes and my car. 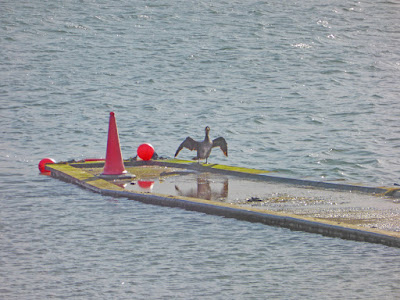 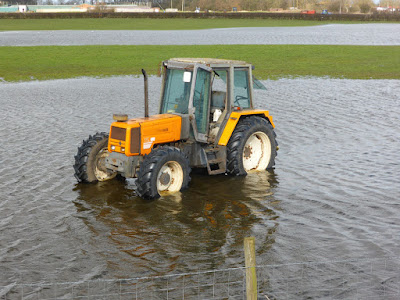