(n.b. Ordnance Survey has spelling for the gill as above and for the the Hall as Hebblethwaite)

At last I head north again after spending months combing the non-industrial parts of Lancashire on my OS Sheet 103 Blackburn and Burnley trig point campaign.

I stopped to buy lunchtime munchies at the Spa petrol station in Milnthorpe.

Down to The Madman diesel has gone from £1.51 per litre to £1.72! I suspect that it may continue to rise. A pity we can't reincarnate John Wilkes Booth and send him off east on a more appropriate mission. Back on the road my attitude to driving sobered and I progressed at a steady 60mph in the nearside lane. With the modest amount of mileage I do I suppose I can handle that increase, but on top of the overall energy increases along with almost everything else I can see some stricter economy will be needed. Goodness knows how the less well-off will cope.

However, what joy to be heading into the dales on a blue-sky-sunny-morning. I had researched a good lay-by for parking at Straight Bridge and a short plod up the road had me off onto a track heading for Hebblethwaite Hall. A sign informed me of a local campaign to encourage red squirrels. As I approached the hall, which I never saw, the footpath skirting round farm buildings hiding the residence, I saw a grey run across,  but no sign of reds. One sees many attempts at reintroductions and/or conservation of areas for a particular rarity of flora or fauna but it is an uphill task dictating to nature.

When I identified this circular walk I knew that the map showed no footpath crossing from one side of Hebblewaite Gill at the far end. I continued on a pleasant track through woods with dappled sunlight and the impressive gorge of Hebblewaite Gill far blow tumbling in lively fashion over mini waterfalls. The track descended to the gill as the enclosing walls became narrower and steeper. What was now only a path turned sharply to the left and I was confronted by the gill tumbling out of an even steeper gorge and, wow! a dramatic fifty foot limestone wall on the left. Possibility for progress following the gill  look doubtful. I was able to climb on steep grass up the side of the big wall. I found myself uncomfortably close to the edge as I skirted over the top. I continued to follow the gorge on higher ground. Eventually the steep sides eased off to some extent and I was able to descend and cross the stream to start my return journey on the other side.

Whilst the return was still enjoyable much of it crossed squelchy fields and more muddy patches and that feeling of untamed terrain on the outward journey was lost.

It was great to be back in those northern dales, especially with the bonus of a notable discovery. I can see another possibility here following part of the outward route then heading north, but it would involve passing through what was for me the notorious Birks farm where I had one of the most unpleasant landowner encounters ever, but being forewarned I reckon I would be able to avoid confrontation.

WORTH CLICKING PHOTOS TO ENLARGE 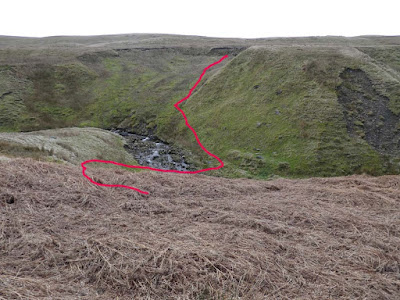 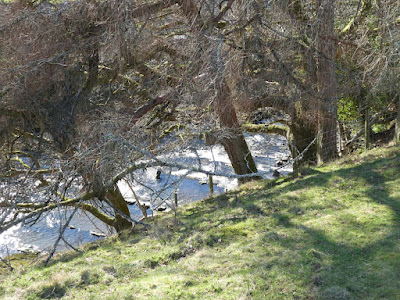 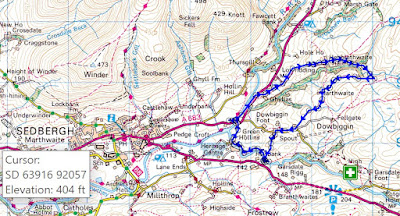