There has been much disruption and bad weather recently and I have not walked much during the last three months and have put on weight and lost fitness, so intend to walk more locally on a regular basis. Such walks hardly qualify for a post here but yesterday I drove a little further afield, albeit only about five miles to Heversham.

I have dithered for ages about my mapping. For years I have had Memory Mp running on Windows 10 which is partitioned on my iMac desktop using Parallels software (Memory Map for Mac has a bad reputation. and therefore avoided by me.) I hate Windows 10 and the whole operation of Memory Map has been clunky especially if I close windows and then re-boot.

I pessimistically anticipated a mammoth struggle installing an alternative. Ages ago I did a trial with Anquet but found it hopelessly user unfriendly. So, on Friday I  bought the Ordnance Survey Premium package for s modest annual £23 for the whole of GB on 1:25 and 1:50. That downloaded seamlessly and similarly onto my iPhone with the app. I still have Memory Map there as well if I want to use it. Today's little four miler was partly to test out the OS mapping and also to explore some paths close to home which, as far as I can remember I haven't walked before. The OS mapping proves to be excellent. I can download  my existing GPX route files, and plot routes altering line thickness, colour and transparency along with many other easy to use attributes with convenient interaction with the app on the iPhone. In my opinion this is a superior product in all departments, especially when we presumably have the continually updated versions of OS mapping.

I parked up close to Heversham church and followed previously walked paths through the churchyard and up the hill skirting the trig on Heversham Head to arrive at the road above Greenside. From then onwards I was on new territory. Both myself snd fellow bloggers have recently noticed yellow paint on the latches of the newly installed swing gates, but I now came across a gate with no suitable latch to daub but it had  the now customary, but inexplicable dash of yellow on its top bar. I didn't climb all the way to the trig, but for others, if they visit here the view is one of the top three in my local area.

Fellow blogger BC has just posted about walking in Yorkshire Dales limestone country, a region with which I have a close affinity, and although not Yorkshire Dales I was in similar terrain with bright green, sheep-cropped pasture dotted with outcrops of whitish limestone combined with the blue of the sky - 'tis all a tonic to the soul.

After a short stretch of country road I was climbing on sheep pasture to pass by Hincaster Hall, a sixteenth century Grade 2 listed farmhouse.  This atmospheric edifice nestles in a mysterious hollow surrounded by gloomy trees awaiting the re-plumage of Spring. I could imagine melodrama - perhaps a prisoner held in upper rooms, or tales of smuggling, or skirmishes between Roundheads and Cavaliers or whatever. Half a mile further on the old farmhouse of High Barns had a contrastingly more congenial setting which I was pleased to capture to my satisfaction in the second of two photos below.

A few hundred yards on a walkway on the A6 gave me the opportunity to photograph and view in more leisurely fashion my favourite local tree. I must have driven past it hundreds of times.

As I turned off on the track to Mabbin Hall I noticed a plaque never seen before detailing the site of an historic milestone, snd once again there was something new to discover from walking along oft driven roads.

Higher up that sunken lane my way was barred by a huge fallen tree. At first I thought I could get through crawling under the fallen trunk, but having done so found that even larger trunks and foliage made progress impossible. I was able to climb out up the banking and fortunately the tree had demolished part of the barbed wire fencing allowing easy access into the field. I followed on with the lane on my right separated by an endless impenetrable hedge. There is always tension in these circumstances hoping for a gate back into the lane or facing the dread of imprisonment or exit into another field, and so on... Escape only occurred when I reached the end of the lane leading onto the minor road for my descent back to Heversham.

Quite a rewarding local outing. 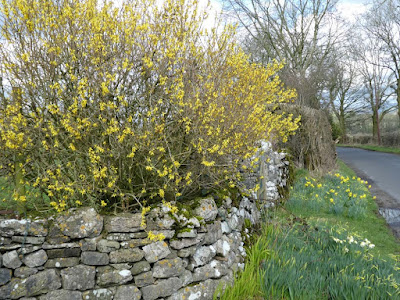 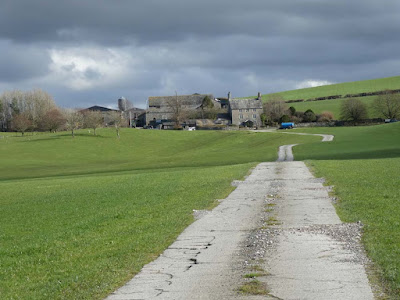 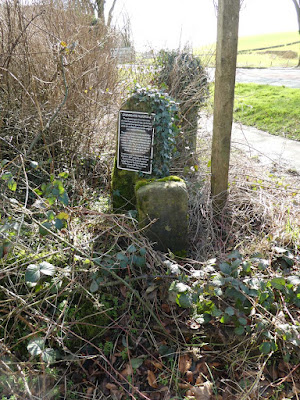 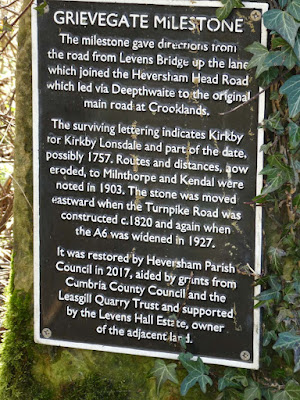