Picking the bones out of Winmarleigh

An earlier start than usual - I had a follow-up appointment with the orthopaedic guy at Lancaster hospital at 10:05am. A little NHS tip here but it's a bit of a gamble: we turned up about twenty minutes early and I was seen almost straightaway and bundled off for an x-ray. All in all we were out and on our way by 10:30. Mr Kumar was satisfied with my progress but has referred me for a nerve test because my little finger is still numb. I asked him if I may take a photo of my x-ray on the screen on his desk, and although not strictly allowable he agreed to look briefly in the other direction, so here is the ghoulish picture which I have never previously had the chance to peruse at length. 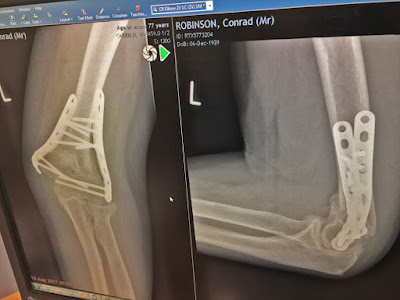 I think the break was where the upper multiple screws are, but it's apparent that it was necessary to screw into the ball joint and profile the two plates to follow the bone's contours. I understand that getting absolutely the correct torque on the screws is critical. I notice that in keeping with backpacking practice "ultralight" plates with holes drilled out for lightness were used.

After all that, and our early start we agreed that a bacon butty had been earned so we drove off to Booths supermarket café in Garstang - for foreigners: Booths is the northern version of Waitrose (said he snobbishly).

We had a pleasant circular walk incorporating the unremarkable village of Winmarleigh; well there is Winmarleigh Hall which has set up a sort of English version of the American "summer camp" where you can get rid of the kids for the summer holidays.

On what I predicted would be quiet country lanes, we were passed several times by life threatening tractors pulling fifteen foot high trailers of silage. Two thirds of our triangle was on single track road with grass growing in the middle, and I soon worked out, later confirmed by a friendly farmer at Ford Green, that the tractors were using a circular route to avoid each other coming the other way on the narrow lanes.

Finishing off at Café Ambio I am sad to report that today, and on our visit last week, their flapjack has taken a downturn. Oats are a principal ingredient, but the quantity seems to have increased, so instead of a pleasant sticky conglomeration we now have something that doesn't bind properly and falls apart, and because of the superfluity of oats one has a more stodgy experience contrasting with the original treacly munchiness. Pete has carrot cake so is not concerned about this problem, but I can see some drastic decision looming here. 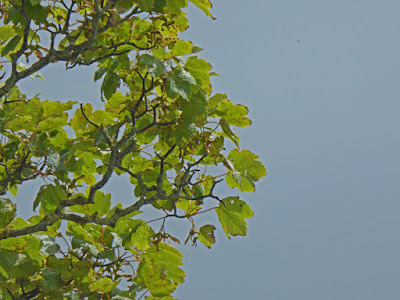