I was sucked in. It looked well designed from a good cotton material with a mesh ventilation feature. Delivery took over two weeks which was not a good omen. Yesterday it went on trial on a ten mile circuit of Semerwater. I'm afraid it will be consigned to my Davy Jone's Locker of "it seemed like a good idea at the time"  items. 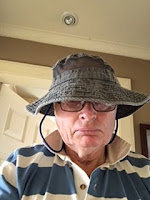 The brim is much wider (and very floppy) than any similar chapeau I have ever seen and forward vision is thus restricted. Even if it is pushed well back it just comes forward again. In addition it does not fit properly  leaving one with a sense of insecurity even without any wind for which a chin strap is provided, but one should only need to use that when wind intensity dictates. The fitting is not remedied by the tightening system, it is more a matter of the way the hat is tailored. Pity.

Contrary to forecast Sunday was dismal with dampness in the air and full-on rain for the last hour. I had only walked twenty yards from the car before I had my first encounter - a retired farmer on a quad-bike parked up and taking in the view of Semerwater from on high, and now employed by local farmers as a mole catcher. He was interesting and pleasant to chat to and obviously appreciated the surroundings, but I know little about how much nuisance moles can be, but it seems sad that we should go around exterminating so much wildlife.

This was a splendid walk in classic Yorkshire Dales limestone country that so much feeds my soul. The slog up Bardale seemed longer than three miles shown on a finger post at Marsett, but it is a wonderful wild dale with a lively steam with swirling brown peat water and intermittent waterfalls, all running over sheets of limestone bedrock.

A short trek down the road from Bardale Head brought me onto the old unsurfaced Roman road that runs straight down to Hawes - I will be coming back in the other direction on part of this during my forthcoming long walk in a week or so - note the pink route on the map.

There were many trials bike motor cyclists whizzing up and own and less frequently 4 x 4s. One of the latter was parked up and I spotted something white above the vehicle and I thought it was a radio ham with a white flag on the top of an aerial - I have often seen these guys at high points on walks. But this guy was flying a drone and trying to teach it to follow his Land Rover, and after a brief chat he jumped in and set off followed (I think) by his faithful drone.

It was shortly after this that I deployed the new brolly (see previous post). As predicted by commenters it cannot easily be used in conjunction with walking poles. I found it not so good on the loose and rocky terrain descending quite steeply where I had more need for the poles than the brolly, but when I reached the Tarmac road it was good for those couple of miles back to the car - it will not be consigned to the "locker."  On a long Tarmac stretch, or other easy terrain I would value its advantages  enough to strap the poles to the rucksack and walk without - we shall see - it will be going with me on the a5th August. 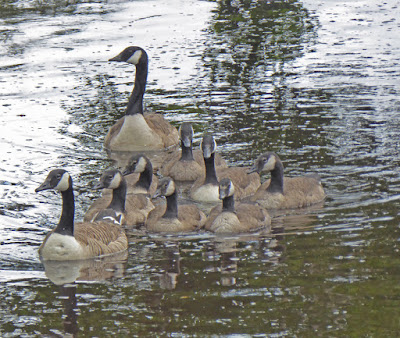 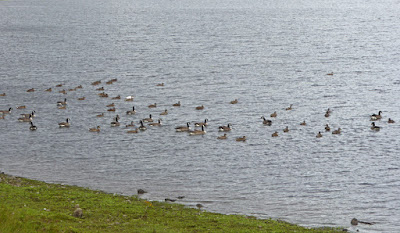 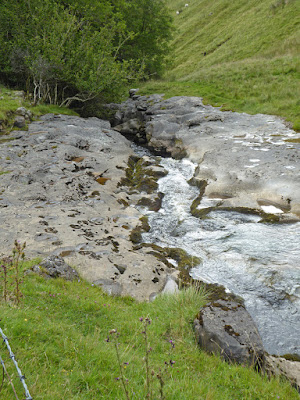