This post is mainly written for my own good to knock some sense into myself arising from frustration at what I perceive as slow recovery from my second knee replacement operation, and, to convince myself that all is not relatively doom and gloom it has to be somewhat detailed. Having analysed the stuff below I  summarise:  I was not doing proper backpacking again until 12 months after the op.

Until I embarked on this exercise all that was a dim memory, and I had the notion that it had been shorter than that. Having said all this I estimate that current progress is probably better than it was for Knee 1, so maybe a bit less than 9 months to go? OK, I know some will say that advancing age should be factored in and it will eventually detract from any such ambitions - we will see.  Patience, patience, patience.

Walks done in 3 months since op: 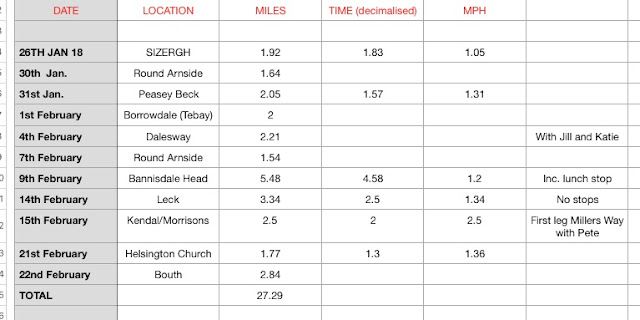 Progress of Knee 1 replacement for comparison.

I had been dong similar walks to the table above, but the first lengthy walk was:

"Yesterday, in pursuance of flat walking, in consideration of my recovering knee, I walked from the A6 through to the M6 end and back, a distance just short of ten miles. That was further than I have walked since the op, and my inclusive speed was 2.8mph so the knee was painful by the end, and I was overwhelmingly tired that evening, but it had been a more than worthwhile trip re-acquainting myself with an all time favourite venue.”

April 2013 - 11 months after op - 16 days with caravan climbing all Marilyns in south of England, so first sustained proper return to walking.

I had a sad email from gimmer bringing me up to date on Margaret Forster the author of Carr's biography and wife of Hunter Davies.

"Did you know she died in 2016 ? Hunter Davies sold their house in the Lorton Vale as he could not bear her absence from that house which they shared almost ‘alone’ in the spring/summer months for 30 years - easy to understand
He wrote an intense article about the sale and the leaving which is the one thing of his I’ve read which I found both utterly moving and sincere."
Posted by Sir Hugh at Saturday, March 03, 2018