I think my main motivation for this walk was the thought of the café at the end. That was not to undermine the pleasure of the walk itself.  On a part-day outing it is debatable whether it is more desirable to have a café at the beginning, halfway round, or at the end. For this walk I could have arranged for any one of those by using a different starting point, but I reckon having a goal and a reward to walk to is part of the enjoyment so I rather prefer the café at the end.

This was just a variation of the walk I eulogised about recently CLICK HERE. For variety I went anti-clockwise. That is another decision one has to make on a circular walk: clockwise or the opposite? There is no definitive rule in my mind, each walk is different. I have noticed when walking with friends the opinion on this can differ, but the reasons seem to be so subjective as to be undefinable.

Sizergh Castle and its National Trust café is a popular launching point for walkers, and today the carpark was well used and there were many people wandering about wearing walking gear, or donning boots by their cars, but I only met two other couples on my walk, and the surrounding path variations are fairly limited - do some of these people just dress up in hiking gear to come to the café?

An initial flat section on a field track led to a rocky path climbing through a wood, then a rather unpleasant section up a quite steep cow trodden, tractor churned field took me to what would be the surprise view, if I hadn't been there before, across the Lyth valley to the distant Lake District hills with The Old Man of Consiton dominating - quite breathtaking the first time it is encountered. Sizergh Castle is now incorporated within the recently extended boundary of the Lake District national park.

Here one also finds Heslington church, and I took the trouble to investigate this modest establishment. It was built in 1762 from an endowment by the farmer at neighbouring Holeslack Farm, hence its isolated position a long way from prospective parishioners, but close for the convenience of the farmer, John Jackson, a strange mixture of altruism and selfishness.

Back at the café jam and butter scone and a pot of tea were taken as a row of oil paintings of the Sizergh Castle/estate owning Strickland family looked down on me from on high, I think they still live there but handed over to the National Trust a few years ago. 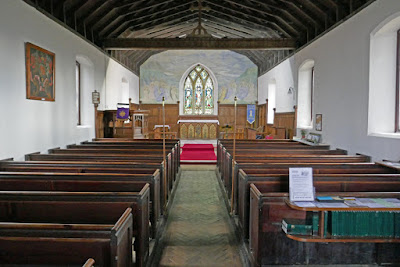