What would you do if you won the Lottery? A question that we all have a conversation about from time to time. Well, I am quite content with my present circumstances but there is one fantasy ambition that I would like to pursue, but only if I could do so with absolutely no worries about cost.

Years ago I built two boats, the second one designed by an eccentric American designer, Phil Bolger famed for eccentric designs that work. Phil Bolger died in 2009 but his portfolio of plans are still sold by Common Sense Boats Click for website

I found that I gained more pleasure from sourcing materials, mastering the techniques of epoxy glue and glass-cloth finishing and other new skills than I did from sailing the boats.They were both hardly used and eventually sold at woefully less return than it had cost to build them, but I knew that would be the case beforehand.

At the time I was starry-eyed and snobbish about the purity of sail, but in the background was another design that itched away at me until I admitted to myself that it could be more fun than a sailing boat.

The design was Bolger's Micro Trawler - here is the description from Bolger:

Micro Trawler is a revolutionary boat! Before her introduction, it was assumed that you would need at least 24 ft. of length and a gas guzzling 150 hp to be able to go over 25 m.p.h. in a boat with two
6 ft 6" berths, two lounging seats, standing headroom in the galley and helm station with a comfortable helmsman chair. Yet amazingly, we accomplish all this with Micro Trawler's 14 ft 6" and 45hp!

Ok, I know it is an ugly little beast, but there is something about it that attracts me, and the thought of having that large outboard on the back appeals to my somewhat rebellious nature.

Of course, after I moved to Arnside I had forsaken my large double garage and there was nowhere to embark on what was only a pipe-dream anyway. That's where my Lottery fantasy comes in.

I would buy or rent an industrial unit, or other suitable building ensuring it had good heating facilities, and for it to be as near to my present home as possible, and equip it with whatever woodworking machinery I needed. The kind of construction involved does not necessarily demand sophisticated equipment, but it is satisfying to make things easier, and to a better standard and also a good excuse to indulge "boys and their toys" addiction. The pleasure would be in as meticulous construction and finish as I could manage, and I would want to use all the best quality fittings, and have it  kitted out to a standard regardless of cost that may be disproportionate to the modest design.

You may think this is an unambitious looking boat considering I would have the funds to build something much more grand, but for me this would be a realistically achievable project that I know I could make a good job of, whereas anything larger or more complicated would become a toil rather than a pleasure, and could well be beyond my capabilities.

As for what I would want to do with the boat once completed I don't really know, except that I would like a brief experience of having it on the water, but that would not be the point. Suffice to say, that with unlimited funds I could  give it away if I wanted to, but I could also afford to keep it under cover which was a problem with the larger of the two boats I built before. I sold that boat partly because I could see that prolonged outdoor storage would take its toll and fairly quickly reduce its value. 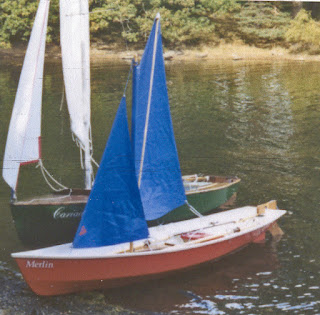