Last night I watched one of my favourite tv presenters:

Waldemar has a forceful presence and a style all his own which relates to no other I know of. He is pleasantly tubby and bouncy with a tendency to waddle, and pops up all over in bizarre locations. Some may say his visage is ugly, but no, he is such a likeable guy it is all character. He talks to you without condescension, and thankfully without academic gobbledygook.


He often underlines weaknesses  in paintings and artists and does a bit of debunking, but then builds them back up with compliments, anecdotes and a sort of satirical humour.

Last night Waldemar was tracing the history of American art starting with ancient Indian cave paintings and then moving on to the Wild West where he focused on the famous Charles Remington bronze: Coming Through the Rye. Waldemar contrasts this to Greek classical sculpture based on learned myths and calssical philosophy, whereas the cowboys are whooping into town after some perhaps dubious foray and on their way to the saloon for more high jinks.

That artwork is for me the most desirable and energetic I think I have ever seen, even though only through the medium of TV and the photo below. I imagine taking renewed pleasure viewing it every day, but sadly it was recently sold to someone else for $11m.

Waldemar progresses to the moderns and makes a brave attempt to relate Jackson Pollock's splashes, dashes and dribbles to the cave art introduced at the beginning, but although I have some respect for the Pollock works I am not convinced about that connection.

I am looking forward to the next episode. 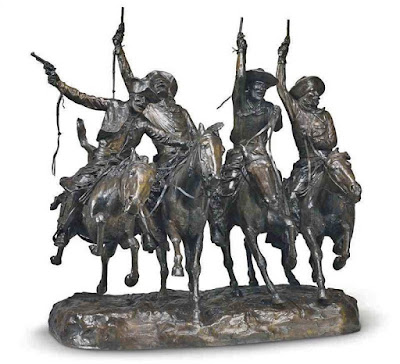