Orton and the old Roman road

I have been gradually increasing walking distance since my first meaningful walk of 1.9 miles on 26th January after the knee operation on 29th November. Today I pushed it to nine miles over mixed terrain, including a bit of rough going (unintentionally.)

In view of the distance I set off from home quite early and was walking by 8:40 in glorious sunshine, and warmth. It was the first time this year that I have been able to have a whole walk without wearing gloves, and for most of the walk I wore only a base layer and a shirt, and if I had not been too lazy I would have removed the base layer.

An ancient lane led out of Orton eventually lined with gnarly hawthorn - I always imagine the old packhorse parties plodding along on these byways.

After connecting with the Orton to Shap road for a hundred yards or so it was out onto open moorland marked as "Roman Road (course of)" on the OS map. which was fine and pleasant walking, mainly on cropped turf. Arriving at a large  modern hut the paths parted and I attempted to follow the one shown on my map below by the green highlight I had appended. Despite using compass, and GPS, which was telling me that I was actually on the footpath shown on the OS map there was no distinct path to follow, and I had a bit of a struggle through shin high heather and the like before getting back onto the route again. Looking at the map now it would have been better to continue on the more substantial path to the point marked "ford" on the map (NY 599 117) then to branch right.

Emerging on the road south of Crosby Ravensworth there was a convenient bench where I sandwiched and drank coffee from my flask, but with some disappointment at not using my new sitting device, but it was a tranquil and peaceful spot leading almost to meditation and a welcome rest.

The walk back south to Orton followed the Lyvennet Beck for a while, a name out of character with this location, and then climbing away through sheep pastures and through a magic trough of moorland to a high point then the descent over more fields and several awkward stone stiles, but all in all a most enjoyable and varied walk ending in the Orton Scar Café with tea and lemon drizzle cake. 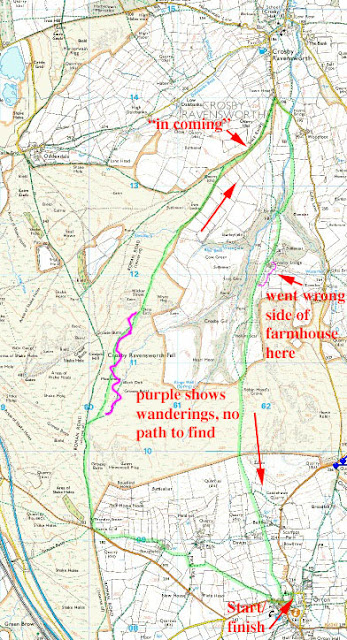