The majority of my walking has usually been solo, but I seem to have walked over various sections of this route several times always with others.  In November 2013 I walked a fair section of it with Gimmer http://conradwalks.blogspot.com/search?q=littledale. And in June 2016 The Lancashire Witches Walk with Bowland Climber coincided, and that walk was discovered by me in June 2016 when investigating a witch's way-mark on a gate whilst walking on another part of this route on a Thursday walk with Pete:

A gate fifteen yards off the road closed off a track. There was a footpath sign, and we could have just walked on - I see many of those which usually turn out to be just a general indication of a public right of way, but something jarred in my mind. Researching the map for this walk I hadn't noticed a public right of way marked here, so I went to investigate. The sign was for the Lancashire Witches Walk
Back home I chatted with Bowland Climber on the phone in the evening and he was enthusiastic to take on this attractive little fifty-one mile route which we could do in sections, either devising circular walks or using two cars for linear stretches.That is what I mean by "making things happen."

Today I wanted to do another 9 miler with the objective of building up to a 12 miler and then  possibly recommencing my Berwick to Castle Carey walk from Hellifield where my knee packed up back in April last year. This time I would try and restrict daily miles to around 12. Certain commitments dictate that this would be after 26th July, so a bit more time to work up to and assess my capability.

As I was driving from Caton I passed two young girls walking and parked perhaps three quarters of a mile further on. After I had been walking in total silence for about half a mile  I heard babbling behind me and although I thought I was walking fairly quickly the two girls had caught me up - they were chatting with overlapping conversation, non-stop, it sounded like a high pitched Bach fugue from behind, and then they passed quickly with pleasantries..

The walk up Littledale was varied on good tracks and paths, through some woodland and fields and all quite remote. An abandoned church was passed - strange how so many churches are built in places of isolation,  one wonders where the congregation came from. I could find nothing on the Internet about it.

At Haylot farm the farmer, the only person I met all day, told me of a landslip on the path ahead. There was a "path closed" notice and I tried to divert, but barbed wire fencing had me beaten and I returned to the notice and went steeply down through the woods on the path to find the landslip at the bottom before crossing the stream. I sat on my bum and sort of dropped off about three feet and the problem was solved - it is so often the case that closed footpaths remain negotiable with care, but it is of course a gamble when you proceed.

There were a few places where I lost the path, and although only short led me into disproportionately time consuming, marshy, tall reed infested terrain, but the whole walk was in a quiet area with outstanding views throughout - a splendid day out. 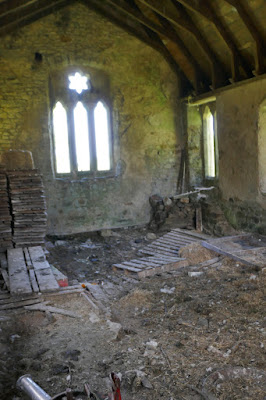