I am now typing this at home.

My Air b and b in the centre of Newport was a first floor room annexed to a pub overlooking the yard where outdoor-smoker-drinkers caroused which made for  a kind of bedtime music - oh how tolerant I am? That was more than could be said for a black cuboid eight inch box that turned out to be a cooler for those awful little sachets of milk which in any case are long life and don't need to be kept refrigerated - this device made a continuous kind of humming hissing noise that was irritating to say the least. If I'd unplugged it would have been against the perceptions of the host for its need so I left it be.

It being Sunday I found that almost every eating establishment in the town was closed. Eventually I found a large fish and chip shop with seating for perhaps fifty. I was the only seated customer. Others kept drifting in for take-aways.

At first sight it didn't look promising, but the chips were to my liking and in particular the fish was cooked skinless, a must as far as I am concerned, and again not to everyone's taste, the batter was really crisp and crunchy - I was well satisfied.

Back at my pub I decided to have a cup of tea. Using a tea bag provided, and the aforementioned mediocre milk sachet I brewed up. The first taste was like Dettol. I presumed the cup had been washed with some kind of cleansing liquid that remained. I ditched the brew, filled the cup with boiling water, rinsed and dried throughly with a towel and re-brewed with a Yorkshire tea bag from the small supply I had brought with me. The result was exactly the same as before. I can only presume it was that awful milk.

Back at home I have a Peter Rabbit child's porringer with images of Peter running round the edge (Royal Doulton I think) - it goes back to my childhood and I remember eating porridge from it so it must now be seventy years old at least. I wouldn't say I attach too much importance to it, but it is a mildly cherished heirloom that has survived. As I vacated my room and walked down the drinker-smoker passageway a replica of my porringer caught my attention - it had been used as an ashtray snd had been despoiled by a revolting mess of squashed out fag ends. 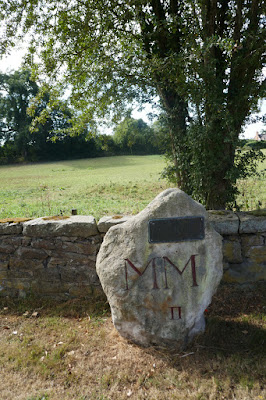 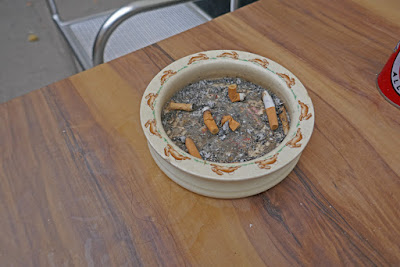