We have followed the cycleway in sections from Caton in the north now down to Ashton Hall well south of Lancaster and it is beginning to look impressive on the map, especially for eighty-five year old Pete.

Today and the previous section included long stretches of tarmac following an unerringly straight line converging to a vanishing point in the distance. That sort of thing can be dispiriting, but today some views opened up of the now estuarine River Lune. On the other side we saw a huge area covered with solar panels - perhaps that's what farmers will do in the future with their land to counter the proposals for excluding red meat from our diets?

The area is populated with a network of electricity Pylons sourcing from the nearby Heysham power station. In particular two majestic giant pylons carry the cables nearly half a kilometre across the estuary - I have seen their relations doing the same further south crossing the Wyre. I quite like pylons in moderation - I imagine them as human like thus detracting from their static stance and appearing more to be on the move taking massive enviable strides regardless of the nature of the terrain they are ghosting over and hurrying with diminishing perspective into the distance.

There were many more family groups of cyclists and walkers and we were often having to dodge out of the way, but most were friendly. We are at the peak of school holidays.

We walk one hour each way which gives us roughly a four mile trip but Pete likens himself to a horse sensing water (in this case tea and cakes at Café Ambio) and we tend to walk faster on the way back - today we covered our two miles out in exactly one hour, but the return journey was five minutes faster.

When we arrive at the turning point we survey for car parking for our next start. Our two miles finished at an old bridge across the path leading from Ashton Hall which sports a café and golf club, the café of course having public access from the main road. At the bridge a well used mud bank went up the side to arrive onto the track over the bridge leading back to Ashton Hall but there was a notice saying "No unauthorised entry." We will have a look from the café car park next time to see if we can walk down that track - if not we will park in Condor Green and walk the short stretch back to today's finishing point under the bridge, then turn and head south again. 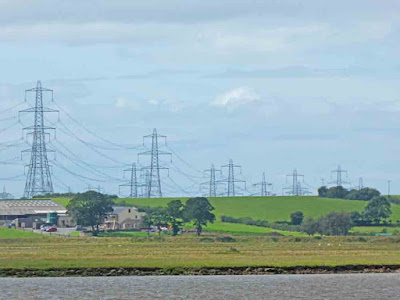