With our walks being frequent conversations tend to be formulaic as do conversations with people we meet.Today's venue was well populated with walkers and cyclists.  A middle aged couple holidaying from The Isle of Man with three dogs stopped for a chat proudly telling us all about their three dogs: a Yorkshire terrier, one terrier unidentified and the star - a Long Legged Hungarian Dachshund. Pete always tells them that he and I have known each other since teenage, and that we climbed all over Europe, throwing in several alpine peaks which list seems to increase along with our encounters.

We often recall our anecdotes for each other many of which have been previously aired, but today I had a new one from Pete.

During Pete's National Service in the RAF he was briefly assigned to an engineering shop under supervision of a friendly long serving NCO. Pete mentioned his climbing background and hinted he would like to make a piton hammer (such things were in their infancy in those days) and the kindly NCO agreed. Pete set to work and was machining the shape on a lathe when a toffee nosed officer with a reputation for strict discipline appeared.

"What are you doing airman?"

Quick as a flash from the wily long serving NCO:

Our walk was a continuation of the Lancaster cycleway from our furthest point a few months ago and it took us through the heart of historic Lancaster following the river Lune.

The Millennium Bridge was adorned with a number of padlocks (see photo below). I saw a single one on a trig point recently and have been enlightened by the younger generation about this practice. It seems couples attach  padlocks and throw away the key to demonstrate their hopefully everlasting love - I wonder if they come back later with an angle grinder after the divorce?

My daughter tells me that a bridge in Paris had so many attached to one side that it became distorted and had to be re-engineered!

The old warehouse buildings lining the river have been refurbished into quality accommodation and the whole area made attractive for this riverside walk which I remember as a place of sordid dereliction twenty years ago. The cycleway continues to Glasson Doack and beyond so this will give us  more walks ideal for Pete on good level surfaces. 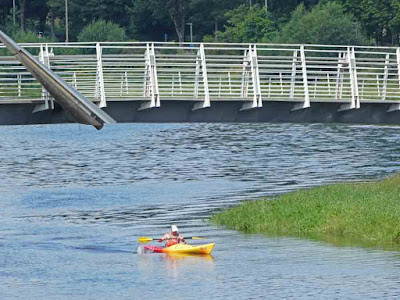 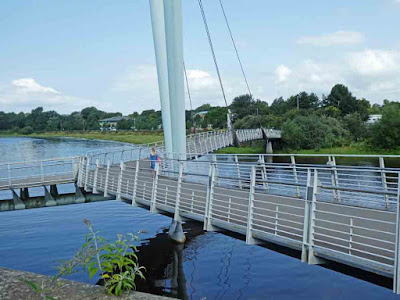 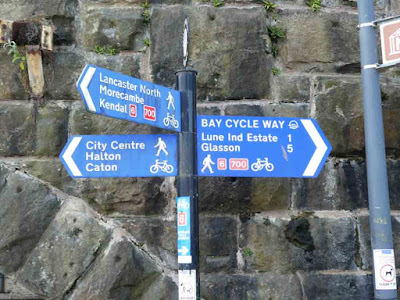 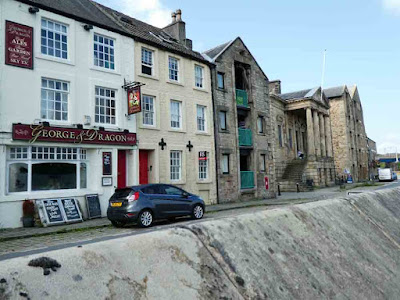