"At the best of times, even in sunshine this crossing of Sleightholme Moor is like walking in porridge. After heavy rain it is like walking in oxtail soup. In mist, although after the first mile one cannot go far wrong with Coal Gill Sike and Frumming Beck as guides, it is a journey of despair."


So says he. As was his perverse wont Alfred walked the Pennine Way from north to south. My route today from Tan Hill Inn went south to north which is the direction most people take as did I in 1987.

Collinson's Hill is only one and a half kilometres south of the A66 but with the need to involve farms, which are not easy to access from the dual carriageway of the A66, that was not an attractive proposition to me. Much better to have some nostalgia re-walking more of the Pennine Way from the south.

As I left the Tan Hill Inn I noticed a gritstone outcrop tucked in behind the the pub but a brief Internet search revealed nothing.

Happily sections of the PW I have re-walked recently have not become fifty foot wide quagmires. Today I found a pleasantly defined path that any walker would welcome, albeit a bit marshy in places. I get the impression that this, the best of England's long distance paths, is not walked as frequently these days. My feelings were more of pleasure than the old curmudgeon's "despair" as I enjoyed the remote moorland country with the purple heather coming into bloom and a wide variety of grasses ranging through the complete palettes of greens, browns, and rusty yellows.

I  branched  off the PW on another plastic terrain track which took me to a Land Rover track leading eventually to within half a kilometre of my trig across medium rough moorland. At the junction of terrain and hardcore there was a jolly sign reading "Killer Butts" to greet the shooters as they would be dropped off to get to their "killing" stations.

Th LR track crossed White Stone Gill by a new substantial bridge where the OS map only says "ford." Following the track climbing up to higher moorland I passed a shooter's hut, then surprisingly a black painted wooden pigeon loft with two pigeons taking the fresh air on their little balcony. My cynical thoughts pondered on the shooter's motives for this incongruity, but my imagination failed, but it still left me with a bet that it was for some dubious purpose. As I plodded I saw several cartridge cases littered on the ground and many traps, all empty - I reckon all wildlife excepting grouse has long since been exterminated.

From Collinson's Hill trig I could see the line of the A66 nearly two kilometres away with a non-stop procession of traffic, the white vans standing out more clearly than others.

On the way back I found what coarse fishermen call a "a good hole" beneath some board walk and munched my Stilton and tomato sandwich and swigged coffee from my flask. A mixed party of four walkers were incoming from the south. They stopped and I was informed they were doing the middle section of the PW only - they hailed from Israel and said I was the first walker they had seen on the trail for two days supporting my suggestion that the PW is now less frequently walked. 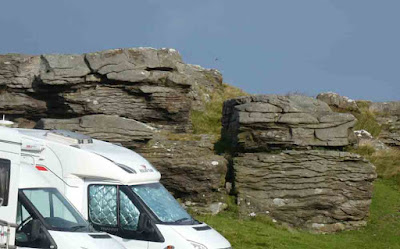 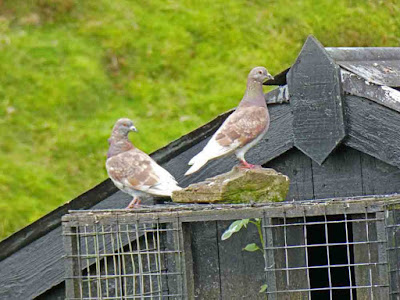 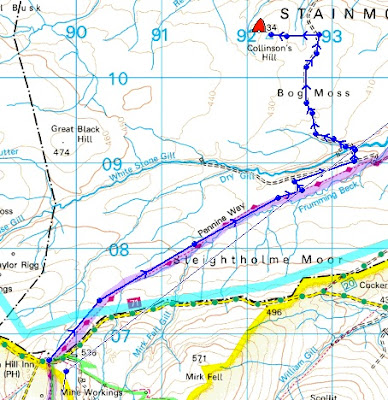