Walking down the south side of the River Lune last week we noticed imposing period houses on the north side which I was pleased to note aroused Pete's curiosity; as a born nosy-parker mine can be aroused by even less conspicuous sightings. We had agreed to explore on our visit today.

I was reluctant to drive over the strange bridge, so I parked again on the south side. The Bridge is wide enough, only just, for one car with a generous footpath, and at intervals concrete posts make the car space even narrower and one is grateful for folding mirrors - there are many scrapes and scratches and although I have driven over several times before I saw no point in unnecessarily risking damage to my precious Kia.

What I thought was a large group of birds a few hundred yards upstream from the bridge settled in an eddy had me taking a zoom shot. Back home I saw most of my "birds" were rocks in shallow water with only a few seagulls perched, presumably "snappers up of unconsidered trifles?"

Over the bridge we turned left on the road which follows the river downstream. We were looking for any opportunity to find footpath access to the river side but none occurred until we passed under the M6 bridge to find a public footpath leading us down and under the new M6/Lancaster link motorway  bridge. I expected to see the ubiquitous graffiti here. The ingenious graffiti artists have some respect from me when they produce quality work, but my respect is increased by their derring-do antics in placing their works in locations to cause observers to wonder, and hopefully to gain kudos from their mates in what I suppose is a competitive pursuit. Most of these bridges are constructed with huge RSJs with a capital I profile which provide a ledge come graffiti artist's footway perhaps eighteen inches wide and being up there wielding spray cans at height, without protection must be pretty scary to say nothing of getting up there in the first place. Surprisingly these opportunists have not linked up their efforts from the south side of the river on this bridge and for the moment it is a blank canvass - it will be interesting to see how long it takes.

Further on run down playing fields, large storage sheds and a helicopter landing pad lead to the army encampment of Halton Army Training Camp with many barrack buildings and workshops and an assault course all surrounded by barbed wire. A tarmac path went off at one point leading to an enclosure the size of a football pitch divided into large tarmac squares. My nosey-parker senses were aroused and I went to investigate. There were two fourteen foot high barbed wire fences set ten yards apart reminiscent of Stalag Luft 111 but no other apparent reason for such security - perhaps it was where the soldiers actually practice being in a prison camp?

I took a couple of photos and then on the way back I was hailed by a civilian dressed guy on the other side of the fencing for the barracks. The barracks looked like vintage National Service units from the Fifties, all shabby and neglected. I imagined some pretty depressing training sessions for the soldiers in this antediluvian spot. Mr Civilian cautioned me politely about this being MOD property and photography not allowed. We continued in polite vain and I was allowed to depart without confiscation of camera or the summoning of the military police - this was hardly on a par with some location for producing enriched uranium. I have jibbed at showing any of the photos of the camp here on the grounds that my next post could come from another of Her Majesty's institutions.

The good track had ended here and a muddy footpath continued alongside the river but Pete was reluctant to continue and we trudged back to the car.

Of course we had not found the houses which was the objective of our three mile there and back expedition but no matter - we had had our usual enjoyable get together with decent weather and of course our visit to Café Ambio where this time we were joined by Pete's wife Liz. 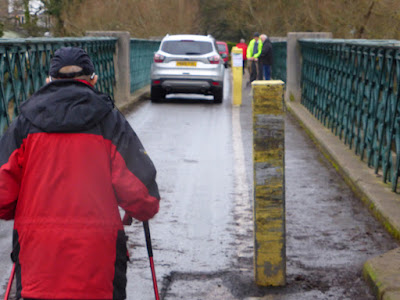 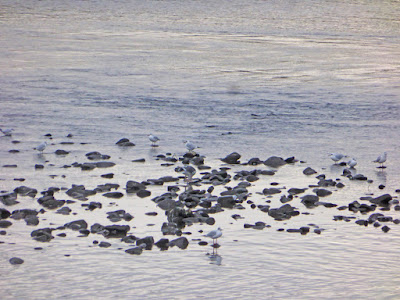 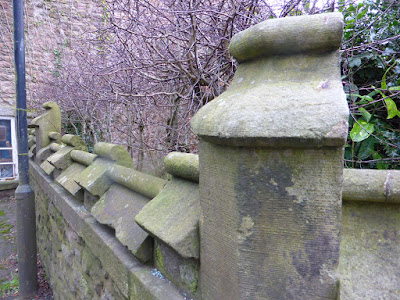 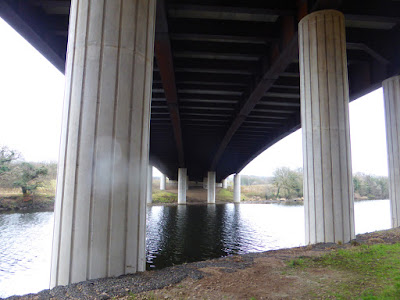 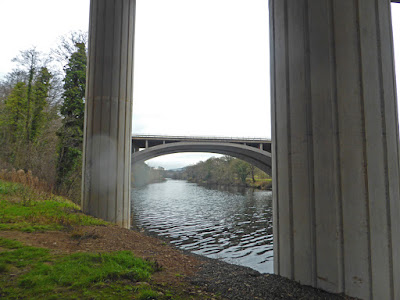