Although it was raining when we set off our walk through Skipwith Common was perhaps the best part of this three day trek. Surprisingly this area was the site of a WW2 airfield but it is now scattered with mature birch and Scots pine carpeted with golden bracken and heather  - it is all reminiscent of wonderful Cannock Chase and according to the information board home to a wide variety of wildlife including nightjars.

To the south we could see trails of emission from Drax power station  drifting horizontally in puff ball clouds blown by the strong wind.

North Duffield had a pretty duck pond and a chap with a shed making bespoke woodcraft items to what appeared to be a high standard and we chatted a while.

If Skipwith Common had been the best part so far our next two and a half kilometres of road walking on the A 163 to Bubwith was the worst. There was only a narrow grass verge and a fair amount of traffic but thankfully it was not as intimidating as we had been anticipating.

From Bubwith we were able to follow the disused railway track which was much more attractive than many I have walked on. North West tonight a few evenings ago had an item announcing the improvement to the planned round England coastal path. I have walked on most of the section they described from Morecambe up to Arnside and beyond and apart from one or two short missing  links I see no need to spend lots of money unnecessarily "improving" existing ancient tracks which seemed to be implied. Much better to seek out sections of our country where at the moment there is no alternative but to walk long distances on busy roads and so provide alternatives. This adoption of the railway track is a good example to follow along with negotiating permissive paths with landowners and the like.

We left the railway path at Froggathorpe to pick up our parked car and head back home after a thoroughly enjoyable three days. 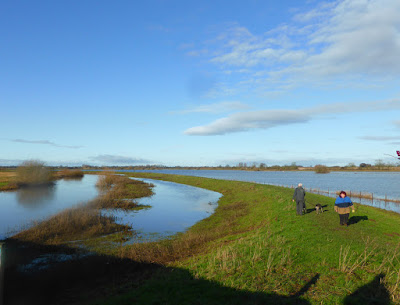