Steinbeck's Travels with Charley made a lasting impression on me many years ago - his opening paragraph is a fine piece describing the fever of wanderlust which those who wander will appreciate. Others who can't empathise have my commiserations. 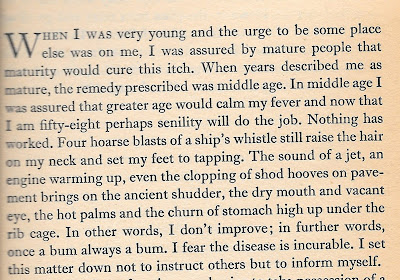 The result of that first paragraph set Steinbeck off on a journey around USA in an RV along with his dog Charley to rediscover his own country which he thought he had neglected for too long.

Well, in my own little way yesterday I had a similar itch to re-explore my own  environs.

Even at ten in the morning the steep road leading down to the path alongside the railway from Black Dyke was icy - black ice which I was fortunate enough to identify from a minor hint underfoot before I might have gone headlong - I continued with much care.

With JS in mind I was looking for any changes on this overdue excursion on local paths.  That was not as easy as one may think - I was walking directly into the low winter sun and could hardly see anything. I did manage to snap a passing train. I understand Northern Rail have put new coaches on our line but have not yet received the full delivery. I'm not sure if my photo is of old or new stock. I nearly collided with a runner, she was coming from the other direction straight out of the sun.

Before crossing over the railway to head for Haweswater (not the Lake District one) Middlebarrow Quarry (disused) rears high above to the right and today it was glowing with that winter sun. Since my last visit its lower perimeter has been enclosed with an ugly barricading fence.

After crossing the railway I noted the reed beds of Silverdale Moss are now even more established following attention of conservation bodies - will we get bitterns nesting there?

Further up the road old farmhouse property has been undergoing redevelopment on the right, but now I saw the barns on the other side are well underway to residential conversion. I chatted with the owner. She told me the quarry fencing had been erected about six months ago "to keep out cyclists and motor bikes...  Health and Safety" she posited.

A steep path to the right provides a shortcut to the Silverdale Road and a stile crossing leading to footpaths to Hawesawater. On the road I met the aforementioned runner again. She must have covered some distance. She was following a route on her smart watch that was merely a single line and  with no other mapping and she was a visitor to the area with no local knowledge, consequently after going on a further hundred yards she returned as I was clambering over the stile on the other side of the road - she had diverged from her line - I couldn't live with that very easily, I am thankful for my OS 1:25 mapping on my iPhone.

Along with similar activity in all parts of the country I have visited in the last few years tree felling mania prevails around Haweswater. Reasons are often given such as opening up views or enhancing the habitat of some butterfly which is on the verge of extinction.

Not much had changed over the fields and track to Yealand Storrs and the footpath across to RSPB Leighton Moss - this is still fine country walking. I had seen many people about on this sunny New Year's Eve but there were even more as I trudged up the causeway past the RSPB Causeway Hide. I had been anticipating a visit to the café - I entered by the back door, then up the stairs to find every single table occupied and unbearable clamour. I just continued unhesitatingly down the far steps and back out through the front door.

There were a few more property conversions as I followed the lanes back to Silverdale. As always the path across The Lotts south of Silverdale was delight on cropped turf.

Another big change is only seen as a snatch view across the cricket field after The Cove. Holgates have extended their static caravan/touring/camping empire by acquiring the old Leeds Boys Club worn out holiday buildings on the headland and replaced them with thirty or so holiday chalets.  Holgates do everything to a high standard - they could well qualify for the best presented such facility in the country, but they charge appropriately - just an example: a caravan touring pitch or a tent pitch £39 per night (all year round). To take on one of their static holiday homes would need deep pockets I reckon.

I walked through the Holgates complex followed by the steep little climb up Heathwaites and back home by the tracks and footpaths around the foot of Arnside Knott.

On the map back at home I was surprised to measure a distance of 9.4 miles.  Because Leighton Moss café was full I had walked the whole distance without a stop.

Steinbeck finishes off with his anticlimax on returning home, but you will have to read the book for more if I have aroused your interest. 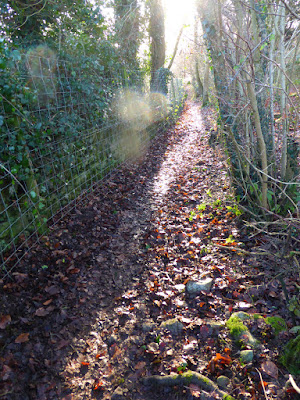 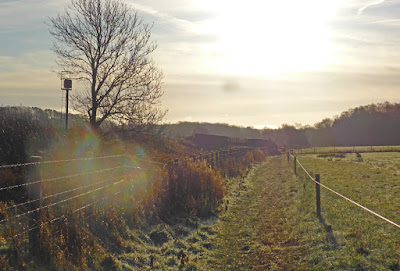