I know I will never walk round the whole coast of England (I have already done all of Wales.)

Browsing the map I wondered how much of the England coast I had walked and I plotted the information very approximately onto a map: 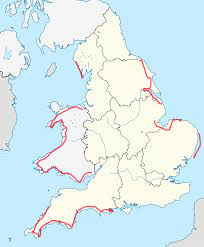 That gave me the idea of filling in the blanks, but not as a serious campaign, just as and when, and with the knowledge it will not be completed. There are bits from Carnforth down to the northern Welsh border that I have walked but they are too small to show on the map but there is much I haven't and all that is more or less within driving distance for day walks.

The nearest home is a short bit from Bolton-le-Sands north up to Carnforth so off I went this morning.

The start is on the shore just south of the Bay View café/garden centre which I have often visited with Pete but walked from there in the opposite direction. A stretch of tarmac leads to the shoreline "footpath" marked on the map as The Lancashire Coastal Way. Much of this area is covered by sea when the highest tides prevail and it is a lacework of deep and shallow puddles interspersed with marsh. With great care I was able to keep my feet dry just wearing Gortex trainers until near the end.

As usual I noticed discarded Lucozade bottles every now and then. They seem to be the most frequently repeating litter item. So does that mean Lucozade drinkers are more prone to littering than other humans? Or are they sold in higher numbers than Mac Donald's burgers thus statistically increasing their mathematical chance of higher frequency? With this worrying puzzle I plodded on  wondering where I stood as an ofttimes purchaser of Lucozade and what does that mean when defining my character?

I returned by lanes and then footpaths across more marshland. A new occupation has been growing for a year or two in our area, that is looking after pet dogs while owners are at work. Bordering my lane was a field where a chap was so engaged with about twenty dogs. They all came tearing across the field towards me barking and leaping at the disturbingly low fence and kept up with me for about two hundred yards until I was past the far end of the field. I am sure those dogs could have jumped the fence and presumably as fairly tame pets they were not of the ilk to be totally ferocious but I reckon I wasn't all that far from being torn limb from limb.

Drama wasn't over yet.

In the next open field there were four horses and a group of six or seven sizeable ponies. As I walked the ponies set off on a parallel course from me but thankfully about fifty yards away. They geared up into a full gallup and when they were about two hundred yards ahead of me they turned and reversed their course again at full gallup and they continued to do this during the whole ten minutes or so it took me to walk across this large field.

I was looking forward to visiting Bay View Café. I drove up there to find new tarmac road leading past a whole newly developed café with three massive glass windows in line and visible inside perhaps more than fifty tables all occupied. The road lead to a massive car park with around a hundred cars parked and no vacancies that I could see, not that I had any intention of stopping after witnessing this monster development from what used to be a cosy little café with friendly staff and home made cakes. I was off back home to a bowl of my own home made soup and malted bloomer toasted and buttered..