A quarry and a wood and a sea battle

After twenty years living in Arnside I am still finding new paths and certainly around Arnside Knott there are paths well established and several feet wide obviously well walked that had no existence whatsoever when I first came here.

I set off to explore a less frequently visited area, but still within easy walking distance of home.

I had only gone a few hundred yards when I found a plaque low down on a garden wall that I must have walked past a hundred times over the years and never seen before. 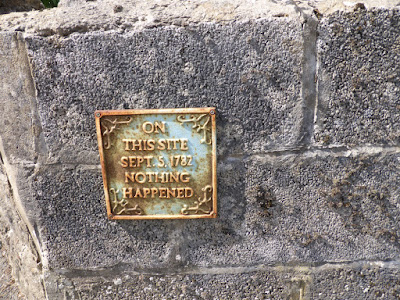 Afterwards I couldn't resist a Google for 5th September 1782. I am sure the plaque location would have been an open field at the time, but whilst the cows were grazing and the peasants toiling there was a ferocious sea battle afoot off the east coast off Long Island. The American War of Independence was in full swing.

The Action of 5 September 1782 took place during the American War of Independence between two French Navy frigates, Aigle and Gloire, and a lone British 74-gun ship of the line HMS Hector. In a two-day battle, the two frigates severely damaged Hector and only failed to captured her when a British squadron appeared on the horizon. The French withdrew but Hector foundered a few days later after the
1782 Central Atlantic hurricane.
Thanks to Wikipedia.

After that exerpt on Wiki, if tales of sea battles and derring-do are to your taste you can read on. There is an account detailing the manoeuvres and sequence of the battle and also the aftermath. You could well be reading a chapter from one of O'Brien's Aubrey/Maturin sagas.

After that drama, as I write, I can't avoid anticlimax for the rest of this quiet pastoral and arboreal walk.

I carried straight on at Middlebarrow Quarry instead of crossing the railway and followed a steep rocky path up the side of the quarry to give me a better than previously seen panoramic view of this now deserted excavation. Nature seems to be making a slow job of re-wilding here.

Unfamiliar northern reaches of Eaves Wood followed with a network of paths I have no recollection of walking before until I arrived at the northern limits of Holgates static caravan empire to make a more familiar descent to Arnside Tower. 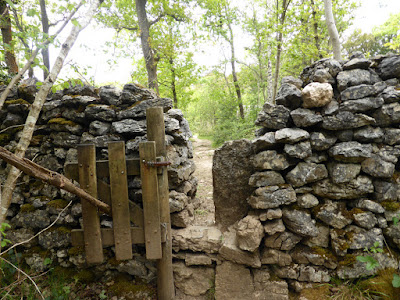 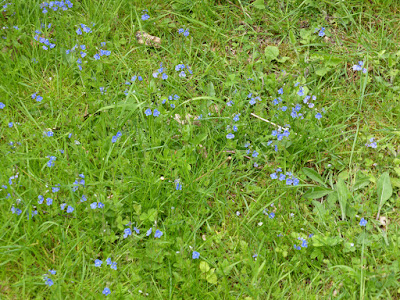