The first photo was taken lazily from sitting in my armchair looking east a couple of days before this walk. I can sit there and watch all kinds of bird activity in the air and birds perching on the rooftops. The chimney that sticks up partly obscures my view of Ingleborough twenty miles away on the horizon, and I can also just see Whernside.

The cloud formation was more dramatic than the photo shows but I get much pleasure from this ever-changing view.

Having walked to the south-west all over Arnside Knott territory for the last few days I decided to head east and re-visit Fairy Steps. That sprang from Bowland Climber reminding me of my last visit with his friend Mel who sadly died a few days ago after a longish period of poor health. I have tried to pinpoint the date both from my blog and BC's without success but it was probably a couple of years ago - I'm sure BC will remember.

Fairy Steps is a limestone crag at the top of the path from Arnside over to Beetham, and is on the route of the long distance Limestone Link path from Arnside to Kirkby Lonsdale. Legend has it that this was one of those tracks over which coffins were hauled. This one involves a tight squeeze through a gap in the crag and some of the iron rings remain used for ropes to manhandle the coffins which at least gives a bit more authentication to the story than other similar old tracks over the hills.
I have a fantasy that on occasions the old villeins got fed up with heaving their burdens about on steep paths and decided to opt for cremation halfway?*

I set off from home which is another few hundred yards away from the start shown on the map below. There are now noticeably more people about. I took a few photos up to and including the squeeze through Fairy Steps then found the camera battery had expired. 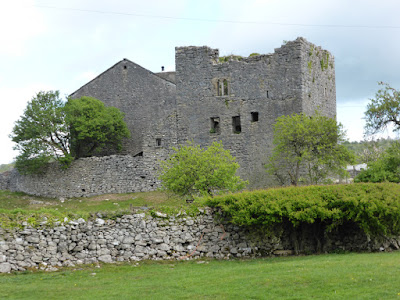 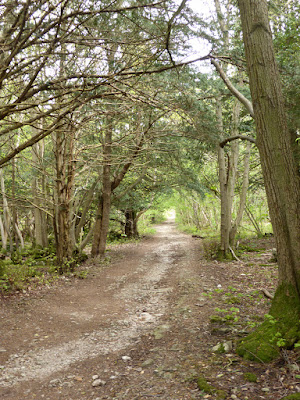 *That reminded me of model aeroplane flying with my son years ago. A well known figure on the scene owned a model shop in the North and he had a friend who owned one in the South. They were both struggling financially. By "coincidence" both shops went up in flames on the same night - the police computer had a wobbler. Jimmy did a spell at her Majesty's pleasure. When we came to hear about him he had a huge four engined model of a Lancaster bomber, and to be fair he had raised lots of money for charity flying it at model shows, but it was not uncommon as folk passed by at these shows to hear them calling out "Have you got a light Jimmy?"