Bowland Climber queried The Dog Hole marked on the OS map on my last post here. Rather than reply by comment here is my reply which allows for more detail than the confines of a comment.

Here is the story of that discovery:

I set out to find this a couple of years ago and was having some difficulty when I came across the owner of a large field which contains an isolated oak tree in the centre, reputed to be the oldest and largest in the area. She kindly showed me the way to Dog Hole Cave, and then on our return invited me to go into the field to have a closer look at the tree. On the gate to the entrance she had fixed a small sign quoting the line from Yeats well known poem "Tread softly because you tread on my dreams." 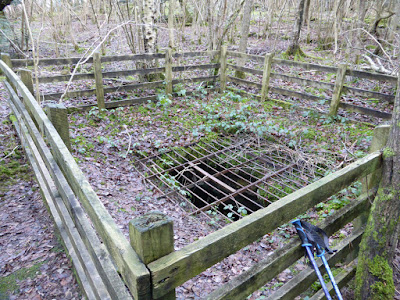 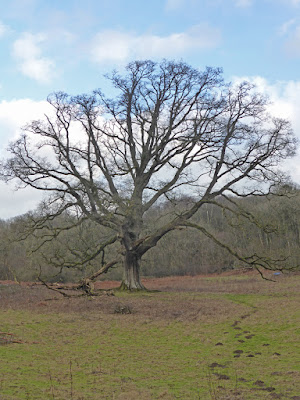 Dog Hole Cave is an archaeologically significant cave near Storth, Cumbria, England.[4] Other names for the cave include Haverbrack Bank Pot,[5] Haverbrack Dog Hole,[2] Fairy Cave,[5] The Dog Hole[5] and Doghole Cave.[6] It consists of a largely excavated 12 metres (39 ft) shaft formed in Carboniferous limestone with 6 metres (20 ft) of steeply dipping phreatic tube at the bottom.[2][3]

It was originally excavated by J. W. ("Wilfred") Jackson in 1912; by local scouts in the 1950s; and by researchers from Liverpool John Moores University in 2003 and more recently. Jackson found domestic animal bones (dogs, pigs) some of which are in the Natural History Museum, and the scouts also found human bones.[4][6] The cave was gated in the 1980s to protect the archaeology, but inspection in 2003 showed that this had been destroyed.[6]

Radio carbon dating of the deposits have provided dates ranging from Romano-British to Early Medieval.[6]
Posted by Sir Hugh at Tuesday, May 12, 2020