Resulting from my woeful lack of memory on my last post, exchanges have been made between me and Big Brother. The post was titled Fairy Steps. There is also a rock climb of the same name in the Quarry at the Cow and Calf, Ilkley where some of my first climbing took place with Big Brother.

At a guess it was about 1957.  I was on a climb to the right of Fairy Steps when I heard a thunderous crashing. Big Brother had been halfway up Fairy Steps and a huge chunk of rock had detached and fallen into the chimney on the right taking BB with it and half burying him. I know some injury was sustained but not serious - this must have been one of the luckiest escapes ever.

The photo below was taken before the rockfall. I'm not sure which of the two lumps I have circled was the one that fell. I am pretty certain they have both gone now. I don't know who took the photo or how I came by it. I am fairly sure that is me handling the rope at the top. 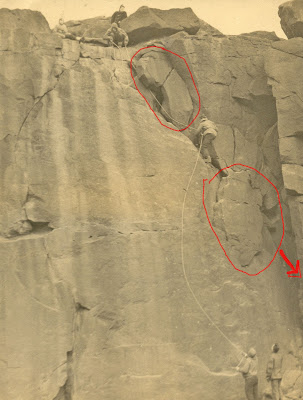 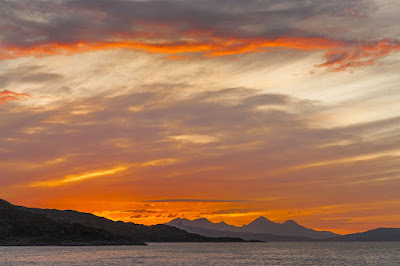 I have received the answer below from Gimmer. I have highlighted the short answer to the question. If you read on there is more related information and explanation of the additional clues that were given. I think I would have been hard pressed to find the answer, but for anybody who had read the book - easy peasy.

The account below came from a MAC doc. file that had been converted into a PDF so that I could open it not having the up to date version of Apple's Pages. I have tried to format the text alignment
which is usually easy enough by applying the "remove formatting" tool and then starting again but I couldn't do any better than you see with this one.
==========================

Answer - the view of Rum from Gortenfern beach , near Arisaig - which has well-known 'Singing Sands' . . . but these 'Singing Sands' are not, however, the singing sands referred to in a scribbled note in the Stop Press panel of the London paper which was in the hand of a man found murdered on the night train from London when it arrived in Inverness - in the novel of that name by Josephine Tay, who died in 1952 - on the same day as HM King George VI - which was published posthumously. Inspector Grant, who picked up the paper and found the verse, on his way to a recuperation sojourn in the Highlands, began to try to unravel the mystery - going to the Outer Isles to see if he could get clues from an area with singing sands - or its inhabitants - but little was gained - eventually, in London , he traced a convoluted path to a long lost 'paradise' oasis in the Arabian desert - with this verse being the leitmotif of the 'journey' - marked by treachery, greed and murder.

The story was found in her papers - it probably needed a bit of tidying up , particularly towards the end, but it is a good tale and a good example of this very satisfying author's work.

For many, this view of Rum form the eastern end of the Ardnamurchan peninsular is 'spectacular' (as are most, of course, but this one is special - not a overt as many , but coyly revealing the island and its peaks) - from low down on the shallow, gently sloping beach, the island appears to be rising up out of the waves that sweep across the bay, the long ridge of Eigg not intruding so much as from higher views (earth's curvature - or just lost in the waves) - in fact it seems to make the peaks of Rum seem to float higher, more distantly and more enticingly, particularly against the setting sun: the view looks directly up Glen Dibidil , with Askival and Allival on the right, and the rounded masses of Anshivall and Sgurr nan Gillian, very different from its Syke namesake, on the left - all making the perfect picture - of a magical island and perfect peaks.

In the mind's eye, the old song comes to life - astride the thwarts of the boat, ' with 'Eigg on the bow, and Rum on the port', carrying the boy "born to be King" ' , sailing from this very quarter ! But back to the question. The connection is , as you would expect, both tortuous and contrived : the verse goes the singing sands the streams that walk the beasts that talk that bar the way to paradise as as for the additional clues source dividing the birthplace of a bitter-sweet confection - River Tay runs through Dundee - where the first marmalade was made desert trading post - recently rediscovered lost fort and fertile oasis near the Saudi/Omani borderlands, apparently once famous for gold and frankincense, said to have been deep in the vast dunes of that desert, which still cause weird and frightening music-like sounds in the high winds of desert storms, that blow both sand and water into wild gyrating shapes , drive animals into hysterical howls and growling - easy to see the springs of the verse

the connections are obvious when you know the answer !
Posted by Sir Hugh at Tuesday, May 05, 2020