Bull Pot Farm sparks my imagination because of its remoteness and it being the "hut" of the Red Rose Caving Club giving it a prominent place in the history of Dales caving and potholing.

On 21st February 2004 I was collecting OS sheet 98 trig points. I set out on an over ambitious route from Bull Pot Farm and climbed Crag Hill, Whernside, Blea Moor, Park Fell and Ingleborough. I arrived at SD 704 749 on the minor road north east of Ingleton facing a cross country trek back to Bull Pot Farm and my car. It was too dark to read the map and I had no head torch. I rang for daughter Jill and she and brother William met me at the Wheatsheaf in Ingleton and drove me back to Bull Pot - it had been a strenuous twenty miler and getting back to Bull Pot would have been a step too far under any conditions (a bit of bad judgement on my part.)

Today I wanted to walk down the private track from the Barbon road to get across to the footpath north of the road and river. I went a hundred yards down the track  then heard shooting further on in the woods and I made a hasty retreat back to the road,

A  hundred yards ahead I saw a gaggle of beaters with their Springers milling around, and in clandestine mode took a quick zoom shot, then briefly passed the time of day as I went by noticing them holding a variety of  rough sticks (for beating with) and wearing a strange mixture of ankle high boots and other footwear and clothing of less than orthodox outdoor fashion.

A  bridleway leads from the road over to Bull Pot with great views behind of the steep sides of Middleton Fell in bright sunlit with rusty bracken and clear blue sky above. Not having previously photographed Bull Pot I had a good look round and took some snaps.

A rough track leads off the road taking one in the direction of the unnamed trig on Barbon Low Fell. A barbed wire fence line was encountered not marked on the 1:25 OS map. I found a place where some slight concession had been made to the barbed wire, but it still posed  a threat - thankfully I managed to climb over without ripping my new, expensive Rohan winter trousers.

A vague path lead eventually to a large cairn overlooking Barbon village. There had been magnificent views all round. Shooting in those woods that I had avoided was continuing frenetically as I descended to the car. The noise of what I presume are modern 12 bore cartridges seemed a lot higher pitched than normal, more like the sound of a prolonged high velocity rifle and incredibly loud.

All in all a very pleasant little excursion marred a little by the presence of mindless folk enjoying killing birds. I was back home for just after 2:00pm.

WORTH CLICKING ON FIRST PHOTO TO ENLARGE AS SLIDESHOW 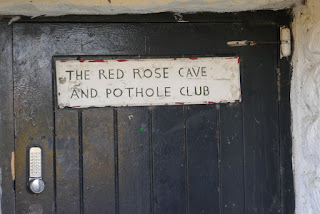 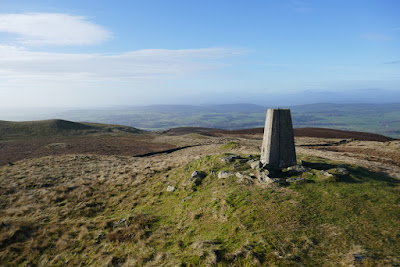 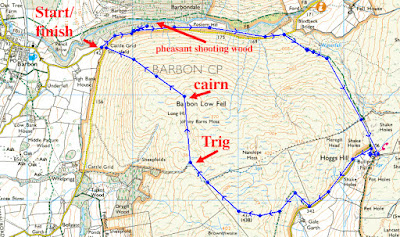